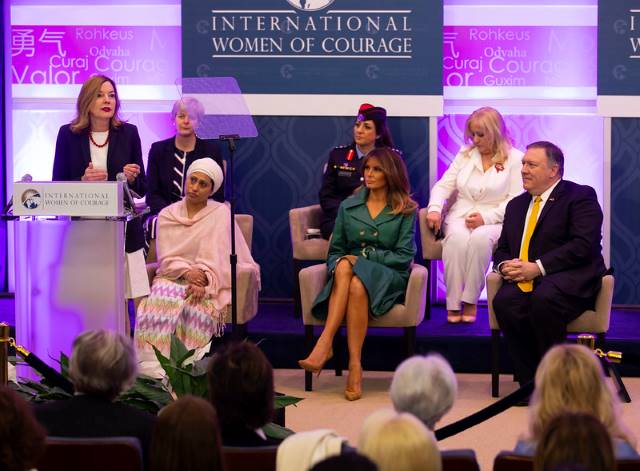 The United States Secretary of State presents the International Women of Courage Award to women who have “demonstrated exceptional courage and leadership in advocating for peace, justice, human rights, gender equality and women’s empowerment, often at great personal risk and sacrifice.” Now running for its 15th year, since its beginning in 2007, more than 155 women have received this award in more than 75 countries.

The International Women of Courage Award

The Secretary of State and First Lady of the United States host a gala ceremony on or around International Women’s Day (March 8), to present the award. The recipients then travel across the U.S. to participate in specially designed International Visitor Leadership Programs (IVLP) experiences. American Women for International Understanding (AWIU) hosts a celebratory dinner for the awardees. AWIU also awards grants so the women can continue their work in their home countries. The 2021 events were virtual due to the COVID-19 pandemic.

Born an Afghan refugee in Pakistan, Fatima Natasha Khalil lived her whole life bravely. In an interview with the New York Times, her sister Lima describes how the midwife walked out halfway through Khalil’s birth. The midwife was furious that the family of refugees could not pay her full fee and so Khalil’s mother had to cut the umbilical cord herself.

Khalil was an excellent student growing up and graduated from the American University of Central Asia with a double major in human rights studies and anthropology in 2019. After graduating she applied for a job at the Afghan Independent Commission of Human Rights (AIHRC) in Kabul, Afghanistan. Khalil’s boss, Shaharzad Akbar explained the difficulty of the line of work. Akbar was reforming the entire organization to rid it of corruption and thus recenter its focus. Additionally, Akbar told Khalil that she might not receive a salary for many months. Khalil gladly accepted the job as donor coordinator for the AIHRC.

On June 27, 2020, an improvised explosive device (IED) exploded under the car that Khalil and AIHRC driver, Jawid Folad, were traveling in.

“You took one of my sisters,” reads Lima’s Twitter profile. “I have one more and four brothers. You can’t cultivate hate in my heart if you even take all of us.”

While no person or group has come forward to claim responsibility for the explosion, similar incidents claim dozens of lives every day in Kabul and other parts of Afghanistan.

The Department of State awarded the International Women of Courage Award to a group of phenomenal women from around the globe. It also included an honorary award for seven women leaders and activists from Afghanistan who were assassinated for their commitment to bettering the lives of their communities. Khalil was one of the women honored because of her courage, bravery and dedication.

The International Women of Courage Award recipients have performed extraordinary work in their fields. From police officers to lawyers and nurses, these women are changing the world, starting with their communities.