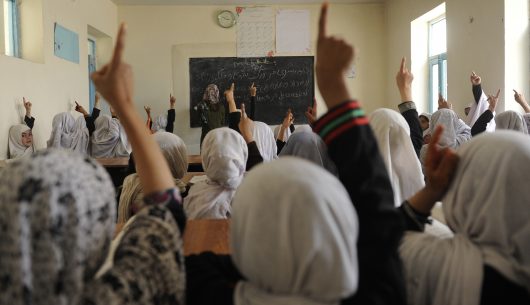 At Mirman, Khajo Secondary School students hurry into class bundled up in their winter uniforms. The school bell chimes. Teachers rush around the room handing out tests. Just a few years ago this wasn’t a reality. The school was recently built as part of the country’s major push to bring access to education to its populace as well as improve the overall standing of education in Afghanistan.

U.S ambassador to Afghanistan Hugo Llorens stated that Afghanistan has made significant educational strides over the past 15 years, but also emphasized that the nation still has a lot of room left for improvement.

According to Asia Foundation’s Survey of the Afghan, people find education is one of the only sectors where the Afghan people feel that the government has made an improvement. The Ministry of Education, with support from USAID, has created a widespread community-based class system, built 16,000 schools and hired and trained more than 154,000 teachers. As a result, enrollment has increased by 60 percent, more than nine million students, 40 percent of whom are girls.

In Afghanistan, 80 percent of the people own smart phones. This prevalence of technology and internet access further aids education in Afghanistan. The Asia Foundation, for example, has developed an education app designed to improve reading skills in grades one through three. The organization has also developed online mock exams to prepare students for the real ones.

The increase of access to education in Afghanistan has also improved higher education. According to the Afghan Central Statistics Organization, public university enrollment has increased from 7,800 in 2001 to 174,425 in 2015, with 21 percent of those students being women.

While Afghanistan has increased education access, it has not achieved the quality of education. Only 30 percent of Afghan students score high enough on the standardized tests to make it into college. While good private schools exist, many public schools are poorly administrated. Irfan, a 10-year-old Afghan student, claims that in public school there are only two lessons a week and teachers will often chase students out of the classroom so they can listen to music.

In order to lift itself out of strife and economic woes, Afghanistan needs an educated public. The government has done incredible work in creating access to education; now it just needs to focus on monitoring public and private schools in order to improve education in Afghanistan.