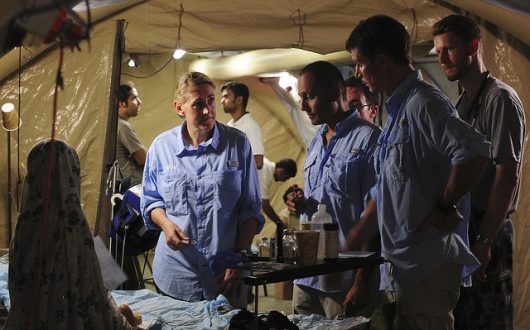 Poverty contributes to poor health and prevents people from access to treatment, which traps the world’s poor in a vicious cycle. The inverse is true as well. Poor health often forces people to purchase expensive care and medications, which over time reduces spending money on anything other than healthcare. Additionally, poor health can limit a person’s ability to work and earn an income, which, combined with the cost of healthcare, can lead to poverty. This has been the case with healthcare in Pakistan.

A study by the World Bank reported that 100 million people worldwide are forced to survive on merely $1.90 a day because of healthcare expenses for themselves or a family member. This problem is exacerbated in developing countries where healthcare services are underfunded and understaffed. Millions of families are being pushed into poverty for less than ideal care. Poverty is both a cause and consequence of poor health, especially in developing countries, which makes finding a solution crucial to ending the cycle of poverty caused by poor health. Affordable and accessible healthcare in Pakistan can help end this cycle.

Pakistan is one of the developing countries searching for a way to alleviate poverty for its citizens. Healthcare in Pakistan needs a great deal of improvement. In June 2016, the Ministry of Planning, Development and Reform found that 39 percent of the country lived in poverty. While poverty rates in the country are declining, there are still over 70 million Pakistanis living on less than $2 a day.  The majority of families living on $2 a day do not have the resources to afford expensive life-saving treatment.

The problem is compounded by the lack of adequate care for the families that can afford health expenses. Less than 3 percent of Pakistan’s domestic budget is targeted towards healthcare, which has impeded medical research and infrastructure from flourishing. The public Pakistani healthcare system has a current backlog of more than 2 million people who are waiting to get surgery due to this lack of infrastructure and funding. Affordable and accessible healthcare is almost nonexistent for poor Pakistanis. This has motivated several non-governmental organizations (NGOs) within Pakistan to work to improve health care and make it more affordable.

One of the NGOs in Pakistan is Transparent Hands.  Transparent Hands seeks to make life-saving surgery more affordable and accessible for poor Pakistanis by crowdfunding expensive surgeries and building medical camps where patients can receive these surgeries. Currently, the organization has performed 342 surgeries, spent over $350,000 and developed 25 medical camps that have served 8133 patients. Each of these surgeries has had a life-changing impact on different poor Pakistani families.

A representative for Transparent Hands told The Borgen Project that “most of the patients who reach us suffer from serious health conditions due to which they are unable to even perform their household chores. After they undergo surgical treatment, not only do they become active again, they also start working and earning for their family.”

As an example, they shared the story of a patient who actualized this incredible recovery process. “There was a patient who was unable to sit and walk due to Ankylosing Spondylitis. He was dependent on his family for every little need. After the surgery, he is not only able to walk and sit, but he has also started working and is now an independent person.” This alone shows how proper access to healthcare could have a positive impact on the economy.

Affordable and accessible surgery can change someone’s life for the better. It is crucial to bolster the efforts of organizations like Transparent Hands in order to expand their impact throughout the country. Transparent Hands plans to eventually expand their operations from the province of Punjab to all provinces of Pakistan. Affordable and accessible healthcare in Pakistan will help 70 million Pakistanis escape the devastating cycle of poverty and poor health.