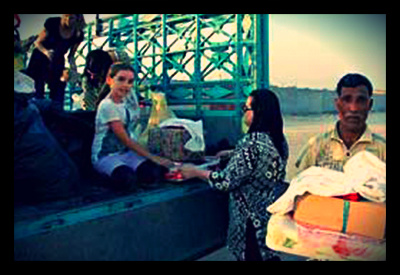 Raising a family of 53,000 can’t be easy, but someone has to do it. In the United Arab Emirates (UAE,) the woman who does so is Saher Shaikh, the head of the Dubai-based charity Adopt-A-Camp. Directed to help some of the 5 million migrant laborers in the UAE, Adopt-A-Camp teaches laborers English lessons as well as teaches them their rights as migrant workers.

Shaikh started this organization after multiple interactions with humble and hardworking migrant workers, and realizing her possible role. Now with 52 camps across the UAE, her standards are still high, as she tells CNN, “Every camp we adopt we make bed bug-free, cockroach-free and lice-free. We physically shampoo the men’s hair ourselves,” proving to them they are just as worthy of healthy living as every other citizen of the UAE.

Over time, Shaikh has picked up some high-ranking supporters in the government, including the Dubai Chamber of Commerce and Industry and the Ministry of Labor. Using this support, she helps ensure payment for the men’s work, something often lacking. Shaikh says, “It was a common problem during the recession, but it still happens now and again. We’d hear from the men that they hadn’t been paid for months, or even a year, and that their families were starving and they were starving. We worked with the Ministry of Labor to help them get home, or find a better job.” This allowed hopeful futures and stability for a group of men who once could barely afford bread rolls for their families.

While standards are on the rise, there are still levels of discrepancy that affect the lives of laborers. Employers are required to pay them once a month for their work, and there is a plan of action laborers can take should they not receive payment.

Nicholas McGeehan, a researcher for Human Rights Watch, looked into this and found that the laws aren’t always enforced, saying, “Theoretically, workers can take complaints to the labor courts. Theoretically, they should be able to get their salaries back, but justice is dispensed in a very ad hoc manner, if it is dispensed at all,” showing the lack of separation between government and migrant employers.

Shaikh demonstrates an unfortunately underrepresented population of compassionate people. There is an unlikely hope that Saudi businessmen will support similar initiatives that show concern for migrant workers and offer opportunities for justice.

After eight years of ongoing dedication to Adopt-a-Camp, Shaikh has managed this flourishing organization by herself, gathering members of her growing family and helping them see what they can fight for.