Tag Archive for: Accord on Fire and Building Safety in Bangladesh 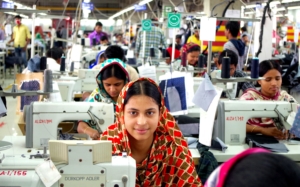 Breaking the ceiling of the minimum living cost per day remains a challenge for millions of the poorest people on the earth, especially women. Amongst the causes of poverty, the fact that women are often not part of the labor force is one of the biggest quagmires that keeps them struggling. However, one area that women in the developing world often work in is the garment industry. In fact, there are many women working in the garment industry in Bangladesh today.

Bangladesh’s garment industry’s products make up the majority of what it exports. The expansion of the garment industry is quickly pulling people out of poverty in Bangladesh. Women are the major source of labor, where they make up 80 percent of workers. One might ask whether the garment and textile industry could be a gateway for women in the rest of the world to escape poverty.

Despite the fact that international trade has recently encountered uncertainty, a report from Mckinsey pointed out that the demand for growth from major populated countries, such as India and Indonesia, will continually saturate the market. With the demand continually persisting, many expect that the supply will continue to expand as well.

Beyond Asia, many in Africa see opportunities in the rising garment industry. Case studies from the African Development Bank Group indicate that women make up a significant part of the garment industry in Africa. In Ethiopia and Cote d’Ivoire, the two major cotton cultivators in the world, 80 percent of garment workers are women. Moreover, these countries’ start-up entrepreneurs are largely women.

Lifting Women Out of Poverty

The rising figures of women in the garment industry excite people’s outlook on the economy, but this is not the final answer to lifting women out of poverty. The problems of delayed or no and low payment, forced labor, dangerous working environments and other exploitation of women pull the world’s attention and push for reform. From a global perspective, the campaign for humanitarian improvement is one major goal of the U.N. Sustainable Development Goals. Beyond economic growth, acquiring decent work conditions, gender equality and opportunity for education matter when it comes to empowering women workers.

In Bangladesh, the international garment industry used to benefit from cheap labor because of loose legislative regulations and awful working conditions. More recently, the situation of underpayment has received challenges. For example, garment workers in Bangladesh raised their issues of low wages and poor working conditions, causing unrest and subsequently leading to Bangladesh increasing the minimum wage by 5 percent. This may seem minor, but it greatly impacted the garment industry in Bangladesh and started the process of reform. Consequential bills, including the signing of the Accord on Fire and Building Safety in Bangladesh and the Alliance for Bangladesh Worker Safety, constantly forge the formal framework to ensure the well-being of women in the garment industry.

The development of the global garment industry is a good hammer for women to smash the wall of poverty, but they still require more. The problems rooted in the most impoverished countries are not only “money concerned.” Social injustice and gender bias also influence the liberation of women. Luckily, the action of women and their social power is opening another window for reforms and improvement.