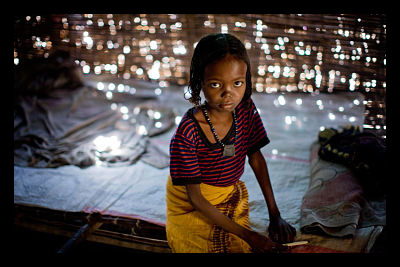 Throughout history, we see women fighting for liberation. These heroines didn’t stop until what they wanted was achieved. In America, the Women’s Suffrage Movement began in 1848 and quickly netted victories. Women gained the right to sue, and inherit property. Women fought for the right to vote in primary elections and eventually gained access to full voting rights in 1920 with the ratification of the 19th Amendment.

Today, gender inequality is heavily spoken of in terms of a work environment: equal pay and equal opportunity. Rarely is the issue of girls being sold into slavery highlighted in national headlines. Seldom is it publicly mentioned that nearly one-third of girls around the world that are married before the age of 18. Sadly, the fact that there are so many young girls at risk receives little attention.

In a recent report published by UNICEF, statistics show that about 120 million girls have been forced into a sexual act before reaching the age of 20.

The report shows that over 30 percent of girls were sexually exploited before reaching or in early adolescent years in eight out of 21 countries surveyed. Research shows that many girls become victims of sexual violence “through the use of physical force and/or psychological intimidation.”

While marriage is generally viewed as a joyous part of life, due to the normalcy of abuse in their lives, close to half of all girls worldwide, think that a man is justified in abusing his wife, UNICEF reports.

When one in three adolescent girls between 15 and 19 years of age have been victims receivers of physical, emotional or sexual violence committed by their significant other, is it any surprise that men aren’t seen as a loving and caring patriarch of the family? The data suggests that it is far too common for a man to get away with abusing the person he should love unconditionally.

UNICEF also reported that due to the abuse endured by young girls around the world, partner violence has been found to lead to “homicide, suicide, physical injuries, disability and reduced physical functioning,” The report also stated that substance abuse, mental health problems and aggression are results of partner violence.

Clearly, nobody wins when we ignore the violence that so many women experience.

Women from various Asian countries are being lured to Australia under the pretense of escaping poverty and living a happy married life; however, too often they are faced with exploitation and oppression.

These brides are living in slave-like marriages, where they are constantly abused. Some have reported being kept in isolation, denied basic rights, exploited for work, restricted to the home and denied money.

Immigration data shows that the women in these marriages are coming from China, India, the Philippines and Vietnam, among others. Many of these women agreed to these marriages to escape poverty and terrible living conditions experienced in their home countries.

Authorities have found it difficult to determine the exact number of women engaging in these relationships because victims are often kept in severe isolation and are punished if they attempt to seek help.

A large part of the problem lies in the fact that women are forbidden to report the crimes and are dependent on their perpetrators for survival. They face the possibility of deportation if their husbands claim they are illegal citizens.

The Walk Free Foundation published a global slavery index in October, which indicated that approximately 3,300 people are living in modern-day slavery in Australia.

Action is being taken to alleviate the problem. Tony Abbott, Australia’s Prime Minister, announced that the country would invest $94 million to fight domestic violence. This money will be focused on women from culturally diverse and indigenous backgrounds. Additionally, forced marriages have been deemed illegal, while forced labor laws were strengthened in 2013.

Jenny Stanger, a Salvation Army worker who works at a refuge for trafficked people in Sydney, said, “It’s an absolute deception on the part of the perpetrator.” She is working tirelessly to see laws passed that will provide these women with options in their situations. “They [the victims] are looking for a way out, so…the more doors we can open, the more likely someone is going to step through that door.”

While these statistics are interesting, they are a cause for concern when taking into account the amount of abuse that the elderly population is subject to in developing regions. Abuse against elders ranges from sexual,psychological and emotional abuse, financial abuse, neglect and physical violence. This is especially frightening considering the elderly demographic is one of the most under-acknowledged social, public health and human rights issues.

Because women live longer than men, they tend to become the most common target for abuse. This is only amplified by the increasing trend of women living alone. Often times this abuse manifests itself in claims of witchcraft. This might seem like an outdated notion, but the trend continues to this day and has been reported in 41 countries such as Burkina Faso, Cameroon, India, Kenya and Nepal.

While there is data out there regarding elder abuse, there is a considerable lack of statistics regarding this issue. The World Health Organization has found that prevalence rates and estimates of elder abuse only exist in select developed countries, ranging from 1 to 10 percent. Outside of developed countries, the WHO says that abuse is under-reported by as much as 80 percent. This is further emphasized by the sharp decrease in support structures for the elderly population, particularly in developing countries, which points toward increasing neglect and poverty. The relative poverty of the elderly tends to be higher than the population average, no matter how developed the region they live in.

Thankfully, there are organizations to help combat this issue. The International Network for the Prevention of Elder Abuse, founded in 1997, has since gained consultative status with the UN Department of Economic and Social Affairs. By utilizing international collaboration, the INPEA aims to raise awareness and knowledge on these issues, advocate on behalf of the elderly, increase society’s ability to recognize and respond to abuse and research the causes and consequences of abuse.

While there is work being done to help decrease abuse, more needs to be done as elder abuse is proving to be an increasingly pressing issue considering the steady increase in the aging population.