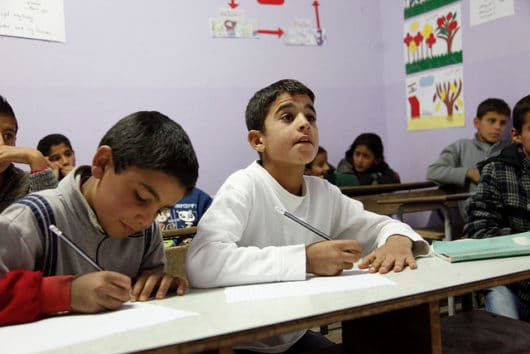 Just seven years ago, Syria was a regional leader in basic education. Unfortunately, education is one of the many social structures that has suffered amidst the uprising of civil conflict. In 2011, antigovernment protests broke out in Syria in response to the authoritarian rhetoric of President Bashar al-Assad. The Syrian government used violence to suppress demonstrations, and over time, the conflict turned into a civil war. Hundreds of thousands of Syrians have fled the country, but those who remain are struggling to obtain an education in Syria.

The State of Education in Syria

Many civilians were left in the middle of war-torn chaos where day-to-day activities, like going to school, have become life-threatening and sometimes impossible. Attendance rates have taken a dive since 2011. Today, nearly a decade worth of progress in education in Syria has been reversed due to the conflict. Before the outbreak of war and violence, an estimated 97 percent of primary school-aged children were attending school daily. In 2018, that rate had fallen to 30 percent in the areas hit hardest by the conflict like Aleppo and Idlib.

Many schools have been destroyed by airstrikes and, in regions dominated by ISIS, teachers are often victims of violent attacks if they don’t conform to the curriculum the terrorists want to be taught. And yet, some have managed their way around the destructive turmoil. To continue education in Syria, teachers have set up makeshift classrooms in caves and abandoned poultry farms. Despite the limited space and decreased lighting, caves have proven to be one of the best places for classrooms since underground spaces are safer from airstrikes.

Other teachers like Abudlkafi Alhamdo, an English literature professor in Syria, set up classrooms in vacated apartment buildings. Alhamdo remained in the battle-torn country despite his own thoughts of leaving to protect his wife and children. Amidst the ongoing violence between Assad’s regime and the protestors, students would come to their English teacher without food, shelter, water or their families and seek refuge.

Alhamdo recalled the first pupil who came to him after the attacks on his city, Aleppo. He asked the tardy student what kept him, and the boy responded by informing him that his father and sister had been killed the previous day. Alhamdo offered comfort and care to the student, and after that others came along, affected by the war-caused impoverished conditions.

Education is the Key to Ending Conflict

Alhamdo did more than provide his students with food and water. He continued to teach his pupils regardless of what the conditions were outside the classroom because he believes that, without education, the children may be subjected to the violence of Assad’s regime. The English literature teacher believes that education, in any country, can pull the people out of violence and instead create innovators, leaders and critical thinkers who can combat world issues with peaceful strategies.

UNICEF shares Alhamdo’s belief in the importance of education in Syria. The organization has responded to the education crisis throughout the region placing 120 prefabricated classrooms in cities like Homs and Aleppo. UNICEF has also sent 765,000 book bags containing school supplies across the country, hoping to bring back a glimpse of normalcy for Syrian children.

Efforts made by the teachers who have stayed behind to care for their students and groups like UNICEF are one way that education in Syria has survived. But, the country will not be able to achieve its previous educational status until the conflict is finally resolved and the war is over.