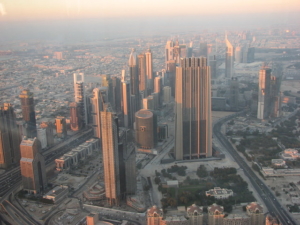 Education in the United Arab Emirates adheres to a system that was developed fairly recently. The country had very few formal schools in the early 1950s, but a school building program implemented over the next two decades greatly expanded the nation’s education system. The UAE now offers universal education at the primary and secondary levels. In 2006-2007, an estimated 650,000 students maintained school enrollment in 1,256 public and private institutions.

Approximately 25 percent of total federal government spending is directed to education in the United Arab Emirates. The UAE boasts one of the world’s lowest pupil-to-teacher ratios of about 15:1 and education is required through the ninth grade, although the U.S. Department of State remains skeptical of the degree to which this rule is enforced. There are no alarming disparities in school enrollment across genders, with an 85 percent primary school enrollment rate for boys and 82 percent for girls in 2006. Secondary school enrollment figures for that same year were lower overall, with 62 percent for boys and 66 percent for girls. Education in the UAE has also yielded relatively high literacy rates. For youths between the ages of 15 and 24, literacy rates in 2008 through 2012 stood at 93.6 percent for males and 97 percent for females.

The education system in the UAE provides both public and private schools with about 60 percent of all students attending public institutions. Public school education is free through the university level for all students with UAE citizenship. These public schools are funded by the government and offer a curriculum that was crafted in alignment with the nation’s development goals. The language of instruction in public schools is Arabic with a strong emphasis on English as a second language. Non-UAE nationals have the option of enrolling in government schools as fee-paying students. Private school fees are regulated by each emirate’s respective educational council, and many private schools have garnered international accreditation. Public schools segregate their students by gender while private schools offer co-educational classes.

The UAE has adopted several education initiatives intended to strengthen the existing education system in a number of key areas. The Ministry of Education’s “Education 2020” is a series of five-year plans aimed at introducing advanced education methods. The program includes an enhanced mathematics and science curriculum introduced at the first-grade level at all public schools in 2003. In order to address the UAE government’s belief that an insufficient knowledge of English remains a major employment barrier for UAE citizens, the Abu Dhabi Education Council began developing an elementary school pilot program with Zayid University that focuses on improving students’ English language skills. In 2006, the education minister heeded the prime minister’s requests and introduced a series of initial steps toward strengthening the nation’s quality of education. These steps included the provision of computer labs, permanent classrooms and modern facilities.

An education initiative encouraging the widespread utilization of new technologies in schools has been introduced by H.H. Shiekh Mohammed bin Rashid Al Maktoum, the vice president and prime minister of the UAE and the ruler of Dubai. The Smart Learning Initiative aims to create a more dynamic learning environment for students through the implementation of smart devices such as tablets in classroom curricula. The program will reach students in public institutions as well as Zayed University, the UAE University and the Higher Colleges of Technology for higher-level education.