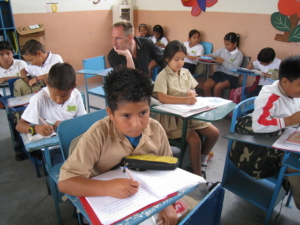 As a developing country, Ecuador faces a significant economic strain, especially in its more rural areas. It ranks as the fourth poorest country in South America with a GDP per capita at $11,036.

Global Citizen Year offers five distinct apprenticeships to its fellows, all of which revolve around social justice and complete cultural immersion. The program prides itself on providing an uncensored version of third-world interaction. This stands in contrast to its counterparts, many of which place a patronizing lens over international service.

When a fellow embarks on their mission to Ecuador, they choose between apprenticeships in agriculture, education, environmental conservation, social enterprise or social work. The duties range from working alongside the local government in efforts to protect vulnerable populations, to helping tutor English in local schools, to working in government-run elderly homes.

The following is an excerpt from Natalia Lanzoni’s June 2019 interview with the Borgen Project regarding Global Citizen Year’s unique approach.

The Borgen Project: What were the biggest culture shocks—especially relating to the level of poverty—you faced when initially arriving in Ecuador?

Lanzoni: There was obviously a considerably less amount of wealth than the average person has in Cambridge. It kind of permeates every aspect of life, even the little things that you don’t think about what we do here. When I would buy groceries with my host-family we would buy one roll of toilet paper, because that’s what their income allows them. Here we don’t even think about it when we’re buying twenty-four rolls of toilet paper. It means that we have a surplus in our income that we can afford to spend it now. There was a lot of privileges I had that I didn’t even realize. Especially the fact that I was able to travel. The host-family told me they had never seen the ocean, which blew my mind because they were a two-hour drive away. Also, my host parents had to cross the U.S. border as illegal immigrants to find work when their son was born, because the U.S. won’t give visas if they see Ecuador in the papers. Their son lived his first ten years parentless.

The Borgen Project: Can you talk about your service experience in Ecuador?

Lanzoni: For the program, we have what’s called an apprenticeship, which is basically a volunteer job in our communities. So, a lot of people are English teachers or assistants to English teachers. English is important because it is so global. The one I worked for was at a local elderly home, it was run by the government of the town which provided a place for them to hang out during the day. They would come there and do crafts and the home would feed them meals. That home also supported families that lived very rarely, that had no sources of income because they were older. And they lived really high on the mountainsides, so a lot of them didn’t even have access to clean water, or they couldn’t walk all the way to the river because it was too far. They were living in pretty extreme poverty and the organization would also make trips out to do activities with them. Also, deliver them food and supplies for their homes.

TBP: Can you explain the ways in which you believe Global Citizen Year ensures long-lasting improvement on both a personal and social level?

Lanzoni: There are two different parts of how the organization is working to combat poverty. There’s the more obvious one which is the labor, the volunteer work that the fellows do while they’re in the country. But obviously, they’re only 18-year-old kids who don’t have a marketable skill or some niche way in which they can help the community. So I think the organization is more focused on the bigger picture, which is educating the leaders of tomorrow and inspiring young kids who are about to go off to college to involve themselves in social work. People don’t really think about going to college to work for a nonprofit combating poverty that often, so this is a way to expose young kids to those types of fields and to hopefully educates them in ways that they know will tangibly help that community down the line.