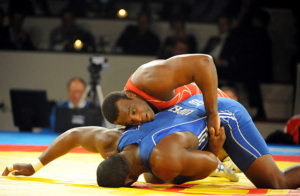 In Senegal, 39% of the population lives in poverty. Thousands of men travel to Dakar in order to make it into wrestling school and train. These men are looking for a way out of poverty and unemployment through Senegalese wrestling because one can make up to $200,000 a fight if successful in the sport.

At least 8,000 boys suffering chronically from unemployment signed up for the CNG which is the main organization that oversees wrestling in Senegal. People see Senegalese wrestling as a promising hope for the future because the money it brings in would instantly change someone’s life for the better. Just in one night, a wrestler can earn “four times the average weekly salary of $20,” according to The San Diego Union-Tribune.

Mohamed “Tyson” Ndao is one wrestler that became very successful in Senegal because of wrestling. Mohamed often receives credit as the person that made Senegalese wrestling popular in the mainstream world. Mohammed, who grew up in Kaolack became a wrestler despite his father’s disapproval of his career choice.

In one fight, Mohamed made more than $4,000 which is an enormous amount of money in Senegal. Senegalese wrestling has become so entrenched with money and corporate sponsorships that Mohamed made it known that he fights only for large amounts of money.

Wrestling in The Gambia

Wrestling is also very traditional and popular in The Gambia, especially in rural areas such as Balangharr in the North Bank Region. It is becoming a huge sensation in Gambia again because it is allowing men, both young and old to make it out of poverty.

The poverty rate in Gambia is 53.4%. Rural areas in The Gambia suffer the most from poverty with “seven out of every 10 rural dwellers” being very poor. Wrestling is very popular in rural areas because rural dwellers are poorer than urban dwellers. Rural dwellers turn to wrestling because it is a real and practical way to make it out of poverty.

In 2021, the unemployment rate in Gambia reached 15.5%. Wrestling is one outlet that could bring stability into the lives of many individuals and provide a way out of poverty.

Abdoulie Ndow is one success story when it comes to rising out of poverty through wrestling. People popularly know Abdoulie as Hoyantaan. Hoyantaan, who grew up in Balangharr showed interest in wrestling after his father and stepfather inspired him. As a rookie wrestler, he caught the attention of many people because he had great technical wrestling skills.

How Wrestling Can Be a Way Out of Poverty

Wrestling can decrease poverty in the lives of many people in Senegal and The Gambia. For many men in both countries, wrestling goes much deeper than just tackling and fighting each other. Wrestling is about surviving. It creates a way for men in Senegal and Gambia to have the life that they have always wanted and dreamed of. Wrestling is encouraging and it provides hope to many young men whose circumstances are telling them that they will never make it out of poverty. The financial benefits attached to wrestling are great enough to make almost every man take a leap of faith in order to escape poverty and have a better life.