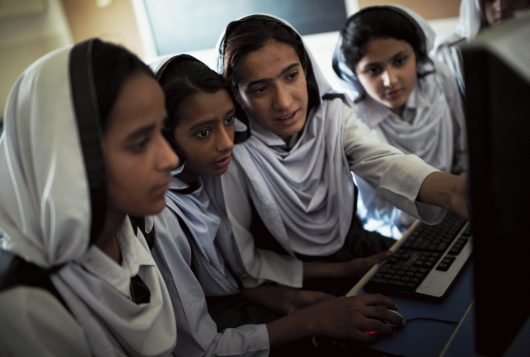 The Citizens Foundation (TCF) is a U.S. based non-profit that supports education for underprivileged children in Pakistan. Since its inception in 1995 TCF has opened 1,441 schools serving 204,000 students, 50 percent of which are female. With adult female literacy in Pakistan resting at 42.7 percent, the organization makes the education and employability of girls a top priority.

This dedication is also evidenced by hiring an all-female staff of 12,000 teachers, making TCF the largest private employer of women in the country. Furthermore, the foundation also prioritizes adult literacy within surrounding communities through its online platform, Aagahi.

The Aagahi Adult Literacy Program was launched in 2005 to facilitate written communication between teachers and parents of students in TCF’s core schools. TCF recognized the important role educated parents play in providing a holistic approach to their children’s’ learning. With female literacy in Pakistan already so low, the foundation created Aagahi specifically with mothers in mind.

The program quickly gained traction, however, and soon TCF began opening learning centers in public spaces to reach more women. Since the start of the program, Aagahi has brought literacy, numeracy and basic life skills to over 59,000 women across 68 of Pakistan’s poorest villages.

In September 2017, TCF was awarded the Confucius Prize for Literacy by UNESCO to celebrate the success of Aagahi. The award is given to adult literacy programs in rural areas. This is the first year Pakistan has ever been the recipient of the award, making it a significant accomplishment.

Aagahi’s online platform is opening new possibilities for women who may have never set foot in a classroom. It is paving the way for a new standard of prioritizing female literacy in Pakistan. The self-confidence gained by the women benefiting from Aagahi can be witnessed in their testimonies. Student Kaneez Fatima said of the program, “Aagahi for me is not merely an activity to pass time; it has given me a new life! I am self-reliant, confident and hopeful towards life.”

The inspiring work being done by The Citizen’s Foundation will continue to expand, empowering women and children across Pakistan.