Tag Archive for: 82% of Rwandan’s Vaccinated Against Deadly Disease 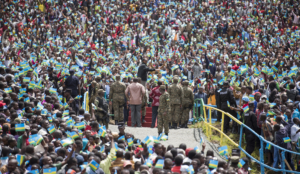