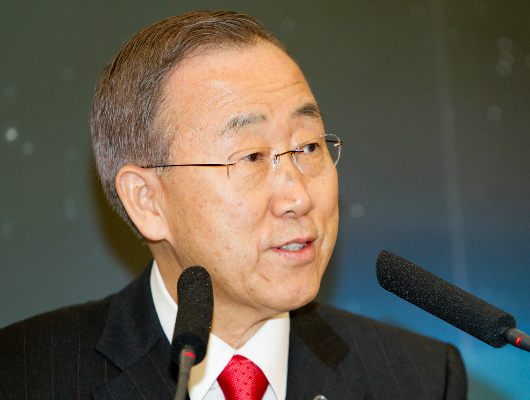 UN Secretary General Ban Ki-moon addressed leaders from all over the world in September, calling on them to join him in ending poverty.

“Our aim is clear,” he said during the 70th UN General Assembly meeting. “Our mission is possible. And our destination is in our sights: an end to extreme poverty by 2030, a life of peace and dignity for all.”

Ki-moon proposed a new UN framework for addressing global issues. The new 17 Sustainable Development Goals are a continuation of the eight Millennium Development Goals introduced in 2000. The 17 goals focus on the UN’s agenda for the next 15 years.

The new framework, he said, “weaves the goals together, with human rights, the rule of law and women’s empowerment as crucial parts of an integrated whole.”

Poverty was a top priority during the 70th UN general assembly. President Barack Obama, among many other world leaders, voiced concern about global poverty, citing urgency and opportunity at this year’s meeting.

Obama’s speech drew attention to the importance of collective diplomacy between nations on issues of poverty and economic inequality. He commended the gathering of nations for securing, as he said, “a global economy that has lifted more than a billion people from poverty.”

At the same time Obama warned that much is left to be done, saying “the march of human progress never travels in a straight line,” and that “dangerous currents risk pulling us back into a darker, more disordered world.”

Obama summarized the UN meeting with a sense of hope. He emphasized progress requiring “a sustained commitment to our people — so farmers can feed more people; so entrepreneurs can start a business without paying a bribe; so young people have the skills they need to succeed in this modern, knowledge-based economy.”

Obama and Ki-moon’s speeches were preliminary descriptions of the ambitious Sustainable Development Goals project proposal. The proposal creates a novel structure of how the UN concentrates on global issues.

The UN Sustainable Development agenda outlined problems nations face in the next 15 years. The UN document acknowledges global issues but also envisions, as it says, “a world in which every country enjoys sustained, inclusive and sustainable economic growth and decent work for all.”

The document both analyzes challenges and presents solutions.

Nations are meeting at “a time of immense opportunity,” the document says in its message. “Within the past generation, hundreds of millions of people have emerged from extreme poverty.”

The 17 development goals for 2030 aim to make the dimensions of the environment, economics and government sustainable. Human rights are at the forefront of the goals, with the alleviation of poverty and curable diseases major points.

“What counts now is translating promises on paper into change on the ground,” Ki-moon said, concluding his speech. “We owe this and much more to the vulnerable, the oppressed, the displaced and the forgotten people in our world.”