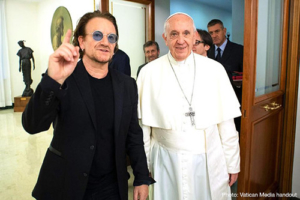 Many celebrities are doing their part to end poverty and illness around the world, searching for ways to contribute to the end of these injustices.  Below is a list of five celebrities that are ending world hunger.

From rags to riches, 50 cent is a prominent American rapper who is using his platform to end hunger in Africa. 50 cent has stated that “every day, families in Africa go without food and water, never knowing when their next meal might be; but we can change that if we all work together.” With every purchase of his new energy shot Street King, a meal is being provided to a child in need.

50 cent is strategically using his social media to promote donating to poor countries. He is using his Street King Facebook page to encourage aid. For every like he gets on the page, he doubles in terms of meals. This means that with a goal of a million likes, 50 cent will donate two million meals.

For Bono, The F Word campaign is not tied to the bad word or obscenity most commonly related to that letter, but rather from the word ‘famine.’ ONE’s F Word campaign created a movie called The F Word: Famine is the Real Obscenity, to showcase the fight to end famine in countries like Somalia, and to encourage action.

ONE.org is raising awareness about the more than 30,000 children that die every three months. Although ONE.org does not solicit funding, there is a petition on the website that pressures world leaders, calling on them to live up to promises already made.

Christina Aguilera is a spokesperson for the World Food Programme’s (WFP) Yum! Brands World Hunger Relief Campaign. She has raised over 148 million dollars. Christina is an active humanitarian who often does field missions around the world in places like Rwanda and Guatemala. She supports WFP’s priority program: Zero Hunger.

Karlie’s Kookies, courtesy of Karlie Kloss and Momofoku’s Milk Bar Christina Tosi, have made an effort to end childhood hunger by donating meals to schools all around the world through FEED.  For every cookie purchase, FEED donates 10 school lunches around the world. To date, FEED has provided 107,532,896 nutritious meals to children in 63 countries around the world.

Matt Damon is a co-founder of the H2O Africa Foundation and campaigning as a spokesperson for Feeding America. He works with the foundations to provide aid for 13 countries to end the water crisis. There are more than 22 million people who are benefiting from Matt Damon and the campaign’s aid.

Celebrities are seeing the need to provide aid to countries in need and are using their platforms to reach these goals. Matt Damon, Karlie Kloss, Christina Aguilera, Bono and 50 cent are just 5 stars that are helping the fight to end world hunger.