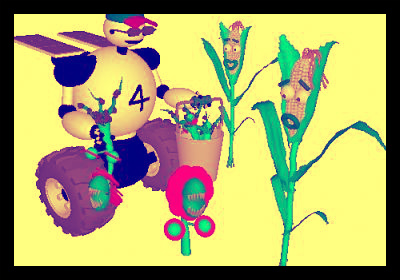 According to a United Nations report, supporting smallholder farmers could lift one billion people out of poverty.

Smallholder farmers provide over 80% of food consumed in the largest parts of the developing world and contribute to food security and poverty reduction. They also produce jobs; currently 2.5 billion people are full or part time smallholder farmers.

1.4 billion people are living under $1.25 a day in rural areas, and they are dependent on agriculture as their main means to a livelihood and food.

Right now the breaking down of prime farming land, little investment in the cause, and the sidelining of small farms in developmental policies are what is holding the agricultural economy back from a new revolution.

A third agricultural revolution, following the British Agricultural Revolution and the Green Revolution, will potentially succeed in feeding the world by 2050.

In the British Agricultural Revolution, farmers improved fertile land in order to sustain the nutrients in soil.  During the Green Revolution, cereal became a heightened focus when it was realized that 90 percent of the world’s food comes from cereals.

“You can cope and adapt to global warming but you can’t cope with hunger, famine or the lack of food to feed the rapidly increasing world’s population,” states Dr. John Baker, who was nominated for the World Food Prize in 2013. “Only four percent of the world’s surface has arable soil and that’s not likely to increase so we have to learn to farm it more sustainably which we simply haven’t been doing.”

Dr. Baker believes the key to ending poverty and feeding the world is through increased agricultural machinery.

And perhaps it’s a combination of improved agricultural machinery and an increase in the promotion of sustainable agriculture that will boost the opportunities for growth in smallholder farmers.

A report released by the UNEP-WCMC and the International Fund for Agricultural Development (IFAD) provided recommendations in hopes of improving the relationship between policymakers and smallholder farmers.

The report included these suggestions:

The promotion of sustainable agriculture has focused on minimizing the impacts of agriculture on the environment and many smallholders feel this robs them of limited opportunities for growth. Farm- and community-level mechanisms that take these concerns into account while scaling up a sustainability landscape approach need to be developed.

Removing policy barriers to sustainable agricultural growth requires market-based mechanisms that provide smallholders with incentives to invest in sustainability, such as:

In order to provide smallholders with the information they need, investing in approaches such as farmer field schools and the use of rural radios and other mobile telecommunication methods is essential.