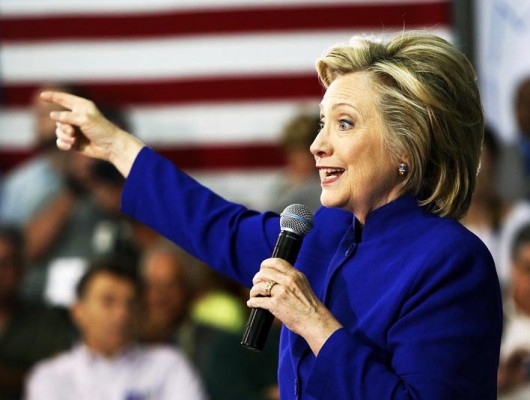 Since her time as First Lady of the United States, Hillary Clinton has been an advocate for American involvement in fighting global poverty. Particularly, her efforts have focused on the rights of marginalized groups and on building lasting development through targeted aid programs and community-led initiatives.

Clinton strongly believes in a “smart power” approach to development and diplomacy, supporting government and non-profit involvement. Lasting and sustainable development, she holds, has the power to transform lives and, by extension, improve stability and prosperity in the U.S.

In a 2010 op-ed for Foreign Affairs Magazine, she wrote, “[Positive development] can strengthen fragile or failing states, support the rise of capable partners that can help solve regional and global problems, and advance democracy and human rights.”

In 2014, Clinton announced her support for a USAID campaign that aims to harness science and technology to end extreme global poverty by 2030. The U.S. Global Development Lab involves 32 partners from private industry, universities, philanthropies and non-governmental organizations. They are working together to develop innovative solutions to a variety of global poverty issues including health, food security and nutrition, education and climate change. The Development Lab, which started in 2011 during Clinton’s term as Secretary of State, aims to reach at least 200 million people by 2019.

In July 2009, Secretary Clinton launched the first Quadrennial Diplomacy and Development Review (QDDR), a general review of the State Department and USAID to “recommend how to better equip, fund, train, and organize ourselves to meet current diplomatic and development priorities.”

During her term as Secretary of State, the United States invested in strengthening global structures such as the G-20 and regional institutions such as the Organization of American States and the Association of Southeast Asian Nations to increase cooperation at the government level.

Her goal in supporting the U.S. Global Health Initiative was “to put an end to isolated and sporadic care by tying individual health programs together to create an integrated, targeted system of care.” An added bonus of this coordination approach was that it shifted leadership to the affected countries themselves, encouraging self-sufficiency and grassroots idea development.

Clinton’s global development advocacy has also focused on promoting human rights, particularly focusing on women and members of the LGBTQ community, whose marginalized statuses have led to continued economic and social disenfranchisement.

In her 1995 speech at the U.N.’s Fourth World Conference on Women, Clinton focused on women’s economic and political mobility as the key to creating flourishing communities and nations abroad. In her speech, she argued, “Every woman, every man, every child, every family and every nation on this planet has a stake in what is being discussed here today.”

As Secretary of State, Hillary made women’s rights a cornerstone of U.S. foreign policy. She created the position of Ambassador-at-Large for Global Women’s Issues and helped create the first U.S. strategy on women, peace and security.

Many Clinton Foundation initiatives focus on supporting small businesses in target countries and educating citizens on improving their practices, such as providing agricultural programs for farmers in Tanzania.

As the 2016 presidential election closes in, Hillary Clinton hopes to highlight her extensive foreign policy experience and her commitment to global development to prove her ability as the most qualified presidential candidate. On her campaign website, Clinton maintains that a key pillar of her foreign policy will be to uphold America’s humanitarian ideals: “America is defined by our diversity and our openness, our devotion to human rights and democracy, and our belief that we can always do more…”