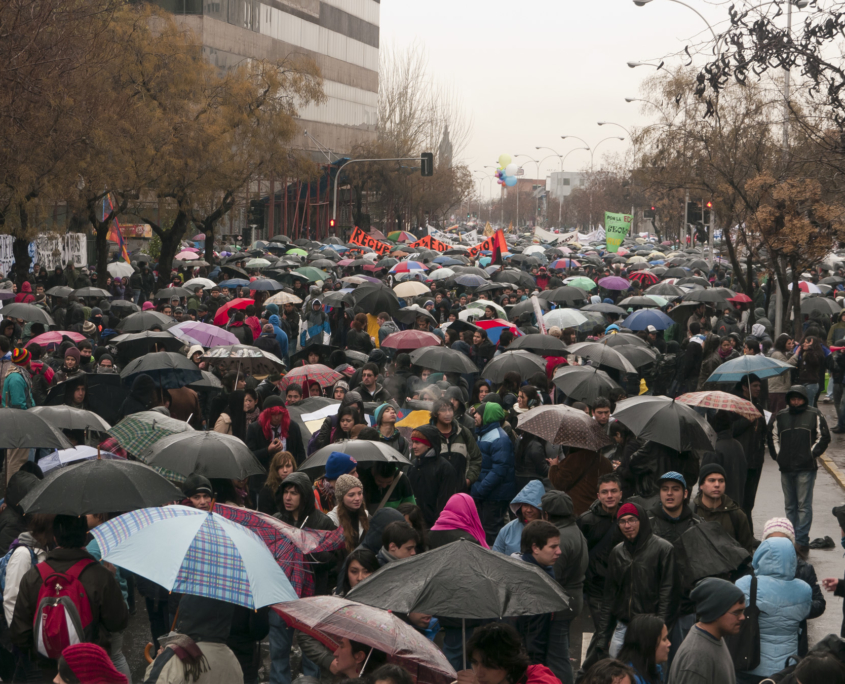 In 1990, Chile democratized after almost two decades under the dictatorship of Augusto Pinochet. His imposition of neoliberalism in the early 1980s, characterized by individualization and competitiveness, dramatically changed education in Chile. Pinochet’s universal educational voucher system set into motion the privatization of education. Three types of schools served children: completely free public schools, fee-based subsidized private schools and non-subsidized private schools that family tuition entirely paid for. Within this system, a student’s socioeconomic status foretold their experiences and educational attainment.

Proponents of privatization argue that giving parents the option to choose the best school for their child leads to competition for student enrollment and thus improved the quality of schools. This promised “choice,” however, was only available to those with the financial resources to afford higher quality, fee-based private schools for their children, leaving underfunded public schools as the only option for impoverished Chilean families.

Marie Gentile, a former teacher for English Opens Doors, a volunteer initiative that the Chilean Ministry of Education supports, told The Borgen Project that she had the opportunity to teach in both a public and a subsidized private school. Gentile reported that teaching in the public school system was “definitely a much different experience. I had a lot of really sweet, engaged kids, but there were also some extreme behavior issues that stemmed from toxic home situations.” She reported that “teaching in a public school was almost always people’s last choice. Once you started teaching in a public school, it was hard to “move up” to a private school, which paid more and had an “easier” student/family population.” Gentile’s experiences show the larger problem of education in Chile and the extreme discrepancy between socioeconomically segregated public and private schools.

The 2015 Program for International Students Assessment indicates that students from the highest quartile in economic status outscored their counterparts in the lowest quartile by about a fourth in science, reading and mathematics. Perpetuating the cyclic nature of poverty is the fact that 60% of students living in poverty, compared with 13% of those from the highest socioeconomic class, enroll in technical-professional programs with the aim of entering the workforce after high school. A student’s socioeconomic status is an accurate predictor of performance in school and postsecondary plans.

Two years after massive student strikes in 2006, the Chilean government passed the Preferential School Subsidy Law (SEP) to “boost student achievement and reduce income-based gaps.” Under SEP, priority students or students from families in the bottom 40% of the income distribution, which would later increase to the bottom 50%, did not have to pay fees and private schools could not deny them due to academic grounds. The effect was that poor families had a wider scope of school choices. Moreover, schools received increased funding to participate in SEP.

To ensure accountability, schools participating in SEP have to administer national assessments. Schools labeled “insufficient” on national assessments for four consecutive years faced potential closure. The Ministry of Education in Chile uses the results of national assessments to “identify the deficits of each [insufficient] school and tailor specific programs that respond’ to those needs,” however, using school closure as a means to improve the system as a whole has undergone fierce debate.

Due to increased choice, funding, accountability and the partial desegregation of schools, the gap in academic performance between the highest and lowest socio-economic rungs of Chilean society narrowed between 2005 and 2012. In fact, the “size of the income-based test-score gap in [4th-grade] mathematics declined by at least one-third.”

To improve upon the SEP legislation, in 2016, the government of Michelle Bachelet passed the Inclusion Law. Markedly, this law increases the number of people receiving “priority student” qualification by 20%, does not require the devolvement of economic, social or academic background in the school admissions process for schools receiving government funding, and states that “by 2018, all schools that receive contributions from the state must be organized as non-profit entities.”

Another equalizing legislative measure is “Gratuidad,” a policy that passed in 2016 and makes college tuition-free in Chile for the lowest 60% of the income distribution. This policy has promising impacts on the number of students living in poverty who attend tertiary school. A report found that “15% of Chilean students in the program would have otherwise not sought a college education.” Gratuidad aims to address concerns raised over years of public protests, including that of high college tuition, student loan debt and the “gulf in quality between the institutions attended by the wealthiest and poorest students.”

Student advocacy groups continue to fight for more equality in education. A recent priority for student protestors is the termination of the PSU, a prerequisite assessment for applying to college. Students argue that the assessment is biased and favors affluent students and data supports their messaging. In 2018, 30% of the public, 43.5% of subsidized private and 79% of fully private school students obtained the minimum score for college application. The PSU, they argue, is another system that disadvantages the disadvantaged.

Since the fall of Pinochet, governments have tried to mitigate the socioeconomic inequities augmented by the dictator’s education system. Inclusive legislation and a strong national student voice have driven Chile forward in its pursuit of equal education in Chile.