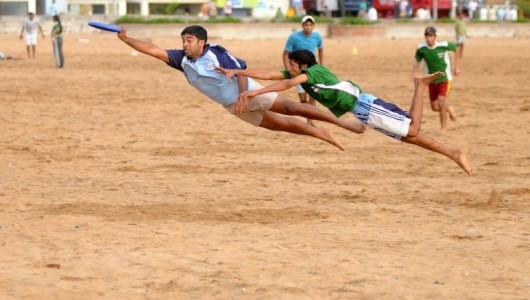 Ultimate frisbee has been adopted in the slums of India as a team-building exercise to encourage unity and prosperity. The Bill & Melinda Gates Foundation sponsored the Sundance Institute Short Film Challenge in 2015, which gave immediate attention to “175 Grams,” a movie about ultimate frisbee and the team united by the sport.

Sports have rules and require dexterity. Ultimate frisbee gives players the freedom to set their rules without referees. It is a leisure sport in the United States, where teams wear matching uniforms and have decorated discs. Often times, events are scheduled at parks, where participants plan day-long activities.

The challenge by Sundance asked for submissions of videos or fictional narratives featuring positive stories about individuals or groups who are beating poverty. There were 90 countries that participated, but a moviemaker in India named Mirle won the competition with his documentary of teens in India’s slums who play ultimate frisbee.

Of the 1.1 billion residents in India, approximately 231,631,442 have been recorded as living in poverty, as of 2010. In coastal areas, fishermen live in depleted conditions. The environment deteriorates because it is vulnerable to natural disasters.

Manu Karan spent time in Boulder, Colorado and returned to Chennai, a city on the coast, in 2007 to complete his MBA program. He had learned how to play ultimate frisbee while in Colorado and brought the game back with him, becoming the founder and president of Chennai Ultimate Frisbee.

The city has 300 players and is home to most of India’s participants in the sport. Children of fishermen, ragpickers and shopkeepers watch other players and eventually join the fun.

Ultimate frisbee cut into bad habits adopted by teens, bringing purpose to lives that had previously felt directionless. These adolescents would often steal mangoes and get into fights on the streets. But all, even those who didn’t have shoes, televisions or enough money to play other sports, were welcome to play ultimate frisbee.

This sport can lift people out of poverty and halt repetitive bad habits. A code of ethics is passed on to both participant and bystander. “175 Grams,” the film created for the Sundance Institute Short Film Challenge, features a team called Fly Wild, where a certain player is determined to continue schooling and maintain a humble reputation.

Teams contain a mixture of social divisions. Many players have different backgrounds, speak different languages, follow different religions and have different amounts of wealth. Men and women are mixed together in teams. There are usually three women for every four men.

Because of this sport, teenagers are learning how to respect others and dress professionally. Nongovernmental organizations such as Pudiyador and IndiCorps are using the sport to educate youth about leadership practices, the importance of unity and gender equality.

Facing separate creeds used to be intimidating, but ultimate frisbee essentially forces others to interact or reconcile, ignoring these differences for the sake of sport. People from the slums and people from upper-middle class families inspire each other. The poor aspire to learn English and desire higher education and opportunity.

Dan Rule, the coach of Australian ultimate players, helped to develop low-cost ways to keep Chennai’s under-23 team players in shape since they do not have access to a gymnasium or other basic equipment. The players of the Australian ultimate team also donated cleats to the players.

There are approximately five million people enjoying the sport in the United States. Ultimate frisbee creates family ties, inspires children and gives adults the opportunity to share their excitement for the game.

Fly Wild and U23 are responsible for shaping lives. People in impoverished India are encouraged to rise out of poverty. Teams are inspiring and uniting the youth of their communities through the sport.