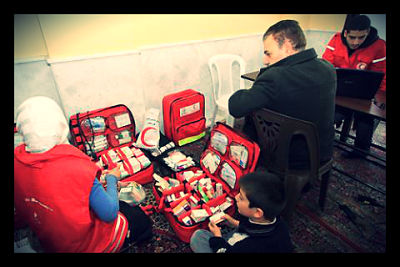 From the end of December 2013 to the beginning of this year, the World Health Organization (WHO) has sent 125 tons of medical supplies to Aleppo, SyrianArabRepublic. Aleppo is the site of thousands of killings and one battleground for Syria’s civil war.

Delivering such a large supply to this crime-ridden area required three shipments. The first shipment would treat 55,000 patients and second shipment approximately 213,000 people. This month’s delivery of 20 tons of supplies will treat 118,000 patients.

Rural villages have been most affected by the crisis of the SyrianArabRepublic. The lack of health workers, shortages of medical supplies and no access to health care facilities have placed most of the Syrian population at risk of a disease outbreak.

Medical supplies that have been collected include surgical materials, ICU beds, medicine and infant incubators. These supplies have reached several NGOs, the Syrian Red Crescent Society and health authorities to treat thousands of patients who have been affected by government air raids. Doctors have been treating a variety of patients with shrapnel wounds, amputations, brain injuries and deep abdominal damages.

Several pharmaceutical plants that produce medicine locally have been damaged and families that can afford medicine are paying extremely high prices on the black market. These shipments are thus giving hope to several families in rural areas that now have some aid distribution centers nearby. Aleppo is the site of destruction, with ongoing machine guns firing and explosives detonating, but civilians are forced to accept the chaos.

Regardless of the city’s dangers, the WHO continues to provide continual supplies since medicine production in Syria has been reduced by 65 percent to 70 percent. Mobile health clinics and local health workers are focusing on infectious disease and outbreak response, malnutrition, mental health and chemical hazards that continue to burden the Syrian population.