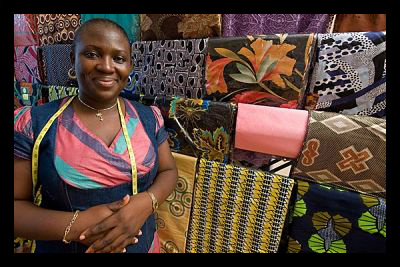 Women and girls make up 70 percent of the 1 billion people worldwide who live on less than $1 per day, yet women produce half of the world’s food, work two-thirds of the world’s working hours and play a crucial role in their local communities’ economies and in the health and welfare of their families.

Empowering women through education — especially on the topic of business and entrepreneurship — is critical to the fight against world poverty. Goldman Sachs’ 10,000 Women program is one impressive initiative that is playing a significant role in this fight, working to provide women entrepreneurs around the world with a life-changing business and management education.

Launched in 2008, the Goldman Sachs Foundation set out with the goal to provide 10,000 under-served women across 43 countries — including Egypt, China, India and Brazil — with entrepreneurial and business skills, as well as with mentoring and networking opportunities.

10,000 Women was founded on research carried out by Sachs — Womenomics and Women Hold Up Half the Sky — that indicated that investing in women can have a significant impact on the gross domestic product (GDP) growth. The finding was an impressive forecast: the per capita income in 15 major developing countries would increase by 14 percent by 2020 and by 20 percent by 2030 if women’s wages would be equal to those of men’s.

The program 10,000 Women was built on the belief that partnerships between public, private and nonprofit sectors are essential to bringing about change through improved education opportunities for women. The program works at the ground level with more than 80 academic and non-governmental organizations, as well as more than 30 of the world’s top-tier business schools. Partners at all levels of the operation contribute their valuable time, mentorship and expertise necessary to implementing the locally designed certificate programs.

For each country in which the 10,000 Women program is launched, partnership is essential. Management and selection committees are formed in each country by bringing together people from the local business schools, business community and partner schools.

In some cases, a representative from Sachs will also join a selection committee. Together, committees in each country select the women who will participate in the program — women whose financial or practical situations would have prevented them from receiving such an education opportunity.

The programs, which are culturally appropriate, flexible and intensive, range from five weeks to six months and are designed to provide each female scholar with an individualized business education. Courses range from marketing and business plan writing to accounting e-commerce. Frequent guest lecturers and business plan competitions add to the exceptionality of the program, which continues to support its participants long after completion through networking, mentorship and support services.

To date, 10,000 Women has reached well beyond its titular goal, and its graduates have reported immediate and sustained business growth. Tracking its graduates’ success, the organization has reported that 30 months after completing the education program, 82 percent of graduates have increased their income and 71 percent have added new jobs. Perhaps more impressively, nine out of 10 participants of the program continue to utilize their newfound business skills by educating, mentoring and supporting other women.

10,000 Women will continue to invest not only in women, children, families and communities, but also, subsequently, in the entire future of our global economy.