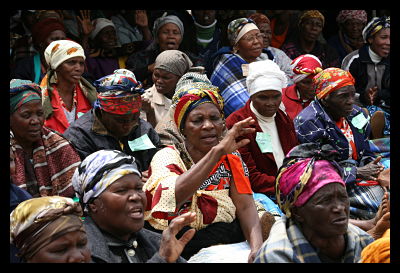 In the moment of need she had to decide whether she will rise to the occasion or fall under the pressure. After the very sudden death of her 26-year-old daughter who left behind five grandchildren – Viola Vaughn was left searching for the pathway to peace. A native of Detroit, Michigan, she spent had much of her life working in Africa. Sensing a need for a return to Africa, her husband and the five grandchildren headed to Kaolack a small town in Senegal.

With a hopeful heart they moved, little did Vaughn know another sudden tragedy, the death of her husband would occur shortly after the move. Lost in her grief Vaughn devoted all of her time to home-schooling her grandchildren ages four to 12.

Word of Vaughn’s success with her grandchildren began spreading and more and more children wanted to have Vaughn as their teacher. Mothers approached her with stories of their children not doing well in school, within two weeks her classroom went from five to 20 students eager to learn from their teacher. Vaughn became more aware of the increasingly low statistical rates of girls getting an education because of the high demands that are put on them on the home front. Most young girls would only fail because they would not be able to make it to classes and exams leading to high dropping out rates and failed classes. In 2001, Vaughn decided to make it official and turned her grandchildren’s bedrooms into classrooms.

She conducted a system of teaching them how to teach and support one another. Within a mere two years the group grew from five to 20 to now 80 girls who are thriving in school. She received a grant and has hired teachers, she had set a limit to 100 but the enrollment rate is exceedingly increasing. The girls are especially ambitious, wanting to take it to 10,000 students.

In order to raise money to reach their goal of 10,000 students, the girls learned to bake. Vaughn taught them and they are now selling their goodies for profit towards the school. With the rapid fundraising of money the girls were able to buy books, supplies and to support more students. The most amazing part is that they are becoming fully self-sufficient, learning skills beyond math and science.

The girls now have a catering, baking and sewing businesses. More than 1,500 girls are now enrolled in Vaughn’s program in six different locations and the waiting list of 1,000 continues to increase. Growing up some of her students were told they would never make it to high school are now earning their college degrees. She hopes that her girls will help revolutionize the region, and she slowly has done just that. The original school started in Senegal, in the city of Kaolack and has since spread to Kaffrine, Kaymor, Koungheul, Maleme-Hoddar, Ndoffane and Kedougou, all small to mid-size towns in Senegal.

10,000 Girls is empowering, uplifting, motivating and encouraging girls all across the globe that they do have the right to an education and they were born with a purpose.