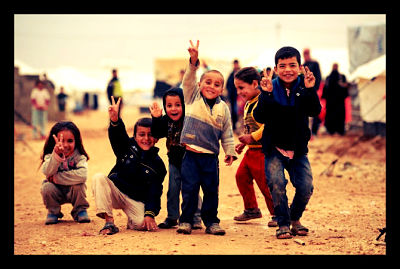 Since the start of the Syrian Civil War in early 2011, over 2 million Syrians have officially registered as refugees. Accounting for those who have not let the UN Refugee Agency know of their whereabouts, experts estimate the actual number of Syrian refugees and displaced people to be even higher.

The crisis is only mounting as more Syrians—up to 8,000 a day—continue to flee the violence and chaos consuming their homeland. Of these refugees, approximately 75 percent are women and children—the latter of whom are particularly vulnerable to psychological trauma from being thrust into new and unfamiliar settings.

Refugee camps are rarely far from the immediate limits of Syria. In the distance, the occasional round of gun shots serve as elevator music and refugees live in soiled, dilapidated tents. Although the UNHCR has been prioritizing aid to these makeshift settlements, resources and funds are limited with so many mouths to feed.

Fortunately, a plethora of humanitarian organizations have stepped up to the plate in assisting the UNHCR. Doctors Without Borders has been providing both medical care and supplies to numerous civilians injured from episodes of violence and armed conflict between the Syrian government and rebels. CARE workers have been providing needy families with money for food shelter, as well as emergency supplies.

World Vision has been hosting educational classes for refugee children in lieu of regular school sessions and establishing networks for clean water and waste removal in campsites both within and outside Syria. Likewise, Save the Children has assisted children in coping with their dire circumstances through psychotherapy and counselling.

The GlobalGiving Foundation, on the other hand, has directly partnered with the UNHCR to collect donations geared toward providing immediate relief and supplies—in conjunction with long term projects, such as helping refugees permanently resettle in third countries. To date, over $55,000 has been raised for the initiative through crowdsourcing.

A mere $11 contribution can supply 5 blankets for insulation during cold desert nights. A $345 donation can allow 17 families to acquire the kitchen appliances necessary to prepare comforting hot food. With nearly 300 individual donors and counting, the GlobalGiving Foundation’s Syrian aid efforts reinforce the notion that it does not take much to make a sizeable ripple in the pond. Just a few dollars can make the difference and make the Syrian refugees feel a little more at home in their unfamiliar surroundings.