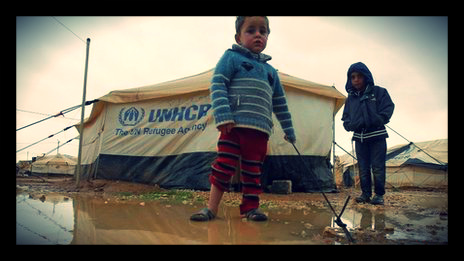 If you want something done right, then you have to do it yourself. Even if that means traveling to dangerous locations with $1600 worth of baggage fees. For every report on monetary aid to Syria, there is an equally compelling report on how that aid fails to reach its intended recipients. Instead of refusing to donate money to avoid becoming part of the problem, many Syrian-Americans are completely skipping the middleman and heading straight to the heart of the matter themselves.

Every few weeks, Omar Chamma makes his way out of his Orange County home leaving behind his wife and three children. By the looks of the dozens of bags he carries with him, it’s clear he is not going on any normal trip. Omar Chamma, originally from Damascus, has been returning to the Syrian-Turkish border to hand-deliver much-needed supplies. “Every time I fly out of Istanbul, I will say, you know, this is my last time – I’m not going to go back again. Then I sit down and think about what I’ve seen. I’ve seen the desperation in their eyes down there. And every time I come back there, there is nobody there showing up to help them.”

There is no huge cargo plane, no guarded UN delivery trucks, and no transfer of money. In his luggage, Mr. Chamma stuffs as much food, medical supplies, and blankets as he can. The rest he will buy once in Turkey with the almost $1.5 million he has collected over the past year from fellow Syrian-Americans living in and around Southern California. He isn’t the director of a non-profit nor volunteering for one. This real-estate investor operates a one-man organization; no red tape, no bureaucracy, and no one to report to.

Except for his wife. Although his family has become used to his frequent trips (he has made 7 in the past year), it doesn’t take away from their constant worrying. His wife Mavis Benton Chamma states, “Every time he goes I just leave it to God. If it’s something is going to happen, at least I know he’s doing what he believes in.”

Although not as independent as Mr. Chamma, Sama Wareh has had the same calling to return to her homeland and help directly in any way she can. Her parents, however, were not in any way excited about it. Because of her promise to them not to cross into Syria on her trips, Sama has remained across the border in Turkey focusing on finding escapees who have not yet found a camp or somewhere to stay. She helps buy food for them and find somewhere safe and warm for them to live. She insists however that on her next trip, she has no intention of staying away from Syria despite her parents’ pleadings.

For many of us, leaving our families and jobs is not easy. Mr. Chamma has been blessed with the money he has raised and the support of his family to do what he feels in necessary to save his people. Sama Wareh, an artist, is able to work around her home lifestyle to go out to Syria and make an immediate difference in the lives of many. They may not be saving millions of lives, but the manner in which they do help Syrian refugees is unparalleled to the way in which the UN and other agencies and organizations deliver their aid.

When hearing these sorts of stories, remember that everyone is given a different path and purpose in life. Your heart may desire to drop everything and go out to the front-line but facing reality is equally important to make sure you make the right decisions. For many of us who donate money through an organization, read and write articles, and discuss global issues with family and friends, our jobs can be as effective as what these Syrian-Americans do. If the timing is perfect and the feeling is genuine, those who wish to eliminate all the unnecessary ‘fluff’ filling the gap between them and a cause they are passionate about will be able to. The millions of dollars donated to Syria and any other country will never compare to the face to face interactions and immediate life-changing moments that Omar Chamma and Sama Wareh have been lucky enough to experience and that many of us will hopefully have a chance to experience as well.