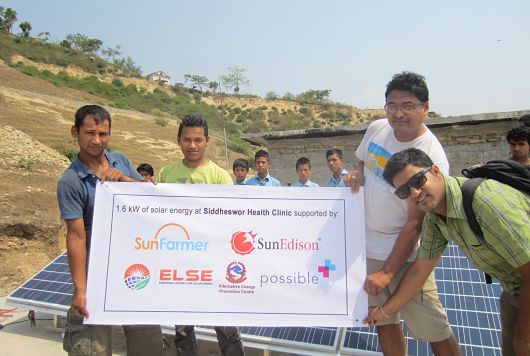 After the devastating earthquakes in Nepal this past April, the co-founder of SunFarmer, Jason Gray, stepped into action. SunFarmer is a nonprofit organization that provides “robust solar energy” to communities removed from a major energy grid. They make solar energy systems called solar lanterns, to help individuals use sunlight as a key resource for renewable energy.

Gray believes that solar energy is leapfrogging the electrical grid in developing countries, just like the mobile phone leapfrogged the landline. SunFarmer offers affordable, risk-free energy for education, health and water projects. Their disaster relief in Nepal is focused on electricity generation systems for hospitals and relief centers.

In Nepal, an individual solar lantern can provide energy for a household, or better yet, three lanterns can power an entire hospital. These solar lanterns provide stable, constant energy to the hospitals, even through dramatic weather changes.

After the earthquakes, disaster relief came quickly to Nepal and medical supplies were donated, however, they could not be used until there was power, which is exactly what SunFarmer supplied. These renewable energy lanterns were essential in the disaster relief, as they supplied stability and reliability when it was most needed.

SunFarmer is focusing their attention on hospitals and water projects. When the earthquakes hit, they immediately mobilized 1,300 solar lanterns, 90 portable chargers and 2 water purification systems. In the following weeks, they raised approximately $3 million to allocate to Nepal for relief, mainly focused on providing water and electricity, but also helped import goods.

Back in 2009, Gray launched the first large-scale solar power project in Canada that proved to be successful, which showed him the possibilities for their use in developing countries. Gray is looking to expand his business to other developing areas, in hopes of helping before any disaster hits. Specifically, he is looking at rural agricultural areas that are stuck in the poverty cycle because they lack a reliable energy source needed for irrigation.

SunFarmer’s long-term goal is to power 4,000 hospitals, schools and water projects, impacting 7 million people, by 2020. They hope to make energy an affordable resource to people in developing countries.

Sources: CBC News, The Globe and Mail
Photo: Else Canada