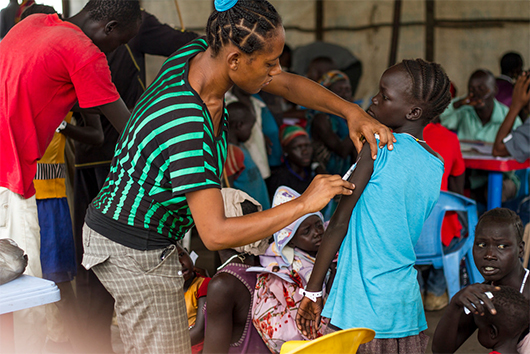 The Nuba Mountains in Sudan were once seen as a sanctuary but because of their remoteness and ongoing military struggle in the area, the largest measles crisis in years is currently sweeping across Sudan. Due to the power struggle between the government and rebels, children have been denied access to immunization.

The measles virus is spread by respiratory transmission and is highly contagious. Up to 90 percent of people without immunity who are sharing a house with an infected person will catch it.

According to UNICEF, Sudan has already seen 2,700 cases of measles this year. “Of these, roughly one in 10 will die. The fear now is that, with around 150,000 children under 5 in the Nuba Mountains who have had no reliable access to immunization since 2011, the situation could explode.”

Without immunization, there is a real potential that more lives will be lost to measles than to the recent Ebola outbreak in West Africa. However, in this case, the majority of lives lost will be children.

Sudan’s recent outbreak of measles is not caused by a lack of immunization efforts. In April 2015, UNICEF launched an immunization campaign to first vaccinate children in the highest risk states and then expanding into other areas identified to be at risk.

Geert Cappelaere, UNICEF Representative in Sudan said, “Measles is a life-threatening disease but on that can easily be prevented with timely immunization. Every girl and boy must be reached no matter where they live. There are no excuses and no child can be left out.”

Children are the most at risk for contracting measles; children who are malnourished are even more vulnerable. For malnourished children, measles can cause serious health complications including blindness, ear infections, pneumonia, and severe diarrhea.

“In Sudan, some 36 percent of children are stunted and the country has one of the highest levels of malnutrition in Africa. Of the total number of reported measles cases in Sudan, 69 percent are below 15 years of age, including 52 percent under the age of five.” A large portion of the children in Sudan is at risk to contract measles.
With the dispute over border territory around the South Kordofan region, the region has struggled to see vital humanitarian aid that is a crucial lifeline. Since 2011, the region has not seen food and medical supplies.

For the partners of Gavi, the Vaccine Alliance, there are few options left to deliver the much-needed vaccines. UNICEF and the World Health Organization have put their support behind the efforts of the Ministry of Health.

In light of this situation, it is also a learning opportunity. Governments must be more proactive about not just responding to humanitarian disasters but by also preventing them. The warning signs need to be recognized. “After all, for any country to have a future it must protect its children.”