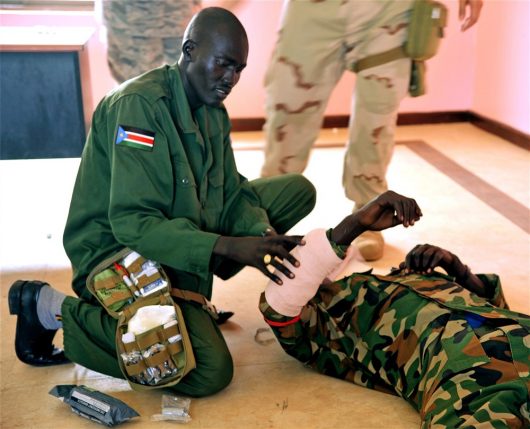 Maar, Sudan is an especially significant location for Atem and Awan because it is the town where they once lived before the Second Sudanese Civil War struck in 1983. During this war, 20,000 Sudanese children – including Atem and Awan – were left on their own after their family members were killed or kidnapped in the conflict. They were known as “The Lost Boys of Sudan.” These children attempted to make a treacherous 1,000-mile journey on foot to reach Ethiopia as refugees. Thousands of boys died on the journey, and Ethiopia did not prove to be a good choice for resettlement. In 1991, war in Ethiopia forced the boys to escape to the Kakuma refugee camp in Kenya. At this refugee camp, the U.S. State Department selected some of the boys for resettlement in the United States. Both Atem and Awan were brought to Michigan and taken in by foster families. In the United States, they went on to attend high school and pursue higher education.

The clinic in Maar provides up-to-date basic healthcare services to patients, while the organization as a whole provides funding to South Sudanese individuals who want to pursue a career in the medical field. The clinic has proved to be invaluable for the inhabitants of Maar, since the village is in a very isolated location. Before the arrival of the SSHCO, the closest clinics to the villagers were about a three day journey away. The Maar Clinic sees up to 3,000 patients monthly. Out of the patients the clinic sees, 80 percent have malaria and 50 percent are under five years old. Around 10 women come in every month to give birth, and 60 percent of the children it sees have some kind of diarrheal disease.

Currently, the SSHCO is working with the Sudanese government to build additional clinics and improve vaccination rates in Sudan. Although Atem and Awan undoubtedly suffered a lot in their early life, they persevered, and have now made it their life purpose to bring hope and health to the people in their home country.