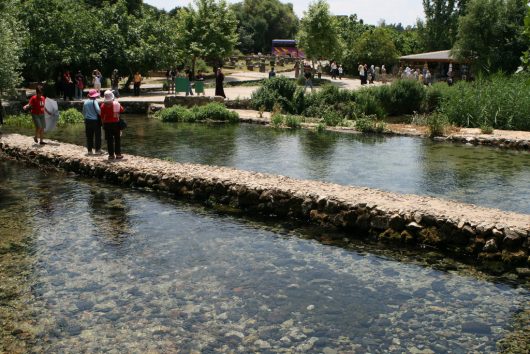 Less than a decade ago, a serious water shortage in Israel threatened the quality of life and future survival of the Israeli people. Water quality and abundance in Israel have improved in recent years with the help of desalination techniques that turn Mediterranean seawater and wastewater into usable water.

Israel is an arid, Mediterranean country with a history of extreme water shortages. The seven-year drought that began in 2005 depleted Israel’s natural water sources and compromised the quality of the water. The Israeli government established the Water Authority in 2007 to focus the efforts on solving the water shortage in Israel.

One of the government’s methods for fixing the water shortage in Israel was its implementation of desalination plants that produce more than 130 billion gallons of water per year. Some experts say that desalination is becoming a cheap and energy-efficient way to treat water.

Desalination processes make more than 50 percent of water for various sectors of Israel, including homes, agriculture and industry. Water is now more expensive for farmers, but it is at least readily available.

Despite plentiful water supplies for Israel, the nation shares its mountain aquifer with the West Bank. Israel claims that it gives Palestinians more than what peace accords require it to give, but Palestinians are not satisfied with the amount or cost of the water.

The technology that solved the water shortage in Israel has not helped the Palestinians who rely on Israel’s water sources. The agreements that provided Palestinians with 20 percent of the water from the mountain aquifer have become outdated as the Palestinian population has almost doubled.

According to The Economist, Palestinians get an average of 73 liters of water a day. The World Health Organization recommends a minimum of 100 liters of water per day. To make matters worse, the coastal aquifer that Palestinians in Gaza rely on is polluted and could soon become permanently damaged.

Israelis have water thanks to revolutionary water treating techniques. Complex political and social struggles prevent Palestinians from gaining access to the same water. Now that Israel has solved its own water shortage, its actions will largely decide if Palestinians get the water that they need to survive.