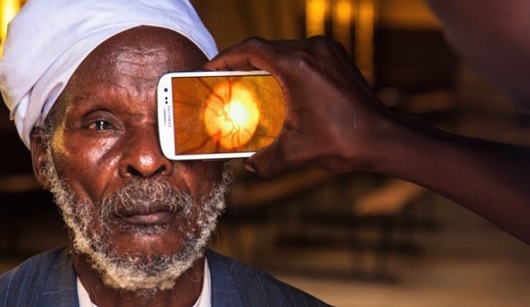 Armed with a $20 smartphone and his own ingenuity, Dr. Hong Sheng Chiong, founder of OphthalmicDocs, is fighting preventable blindness.

With 90% of the world’s visually impaired and blind living in developing countries, access to affordable eye care equipment is out of reach for most visually impaired people. OphthalmicDocs seeks to end that struggle by developing inexpensive, effective eye care equipment that allows doctors to diagnose patients properly using a smartphone camera.

After experiencing developing-world medicine and the need for such affordable eye care firsthand in Kenya, Nepal and Malaysia, Dr. Hong worked with a team to develop the OphthalmicDocs Fundus, a universal smartphone retinal imaging adapter. Able to take high-quality retinal images of both the front and back of the eye, the Fundus functions as a portable retinal camera.

In the interest of making the device widely available, OphthalmicDocs created a free 3D printable template of the device that allows anyone to download, print and assemble a Fundus retinal camera within four hours, regardless of their global location.

A device that would ordinarily cost $10,000 is now accessible for a production cost of $33. Working hand-in-hand with developments in affordable smartphone manufacturing and distribution, as well as sites that connect users to 3D printing technology in their region, OphthalmicDocs’ technology has the potential to revolutionize eye care.

Other devices in the works from OphthalmicDocs include a clip-on adapter meant to convert smartphones into slit lamp microscopes and MAGcro, a universal macro lens for use with smartphones and tablets.

According to the World Health Organization (WHO), 285 million people around the world are visually impaired and 39 million are blind. WHO also found that a staggering 80% of visual impairments arises from preventable causes. However, with global access to free retinal camera technology, these statistics could be phenomena of the past.