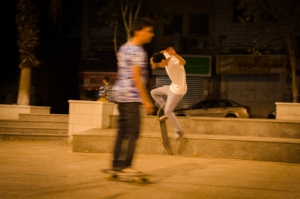 Over the course of the last 14 years, 1,500 Palestinian children have died at the hands of Israel. This high number could be in part of the fact that for children in the Palestine community, there is not a lot to do to occupy the time. With no extra activities around, children get involved in things they probably should stay away from, like protesting.

For example, every Friday since December of 2009, Nabi Saleh’s residents have marched in protest at the confiscation of their land and the consequences they are faced with are tear gas, rubber-coated bullets and occasionally even live fire. There have been more than 100 imprisonments of villagers since demonstrations began and a large proportion of these people are teenagers, who can be held for days, weeks or months.

To help alleviate this and save the children of Palestine from violence, founder of SkatePal, Charlie Davis, 27, had raised enough funds to build Palestine’s first ever skate park. SkatePal was created in 2012 and is a volunteer-run, nonprofit charitable organization. One of the main reasons Davis wanted to build a skate park here was to give the children something healthy to detract their attention from the violence going on in the community.

Currently, SkatePal has 12 volunteers but only two who live in Palestine. Among one of the two is 18-year-old Adham Tamimi, who says that if he wasn’t skating, he would “probably be involved in protests, drugs and stuff like that. But I don’t need drugs or any other stuff, like demos, to be a rebel, because skating is way more than just an extreme sport. It’s a lifestyle that I have to commit to.”

The second volunteer in Palestine is 16-year-old Aram Sabbah. He was involved in a protest in July in which thousands across the West Bank marched in protest against Israeli aggression toward Gaza. To show their protest, kids were throwing stones and when Sabbah ran out of stones to throw, he went to get more and was injured. The Israel Defense Forces blew a hole in Sabbah’s leg.

After the accident Sabbah, still skated around even on his crutches, which actually seemed to help him learn new tricks. In his good fortune, none of his bones were broken and his crutches will only assist him for a little longer.

Moving forward, Davis and his team of volunteers with SkatePal, will design and build three new skateparks throughout Palestine. Thus far, SkatePal is at about 75 percent of their donation goal, 15,000 pounds ($24,872.)