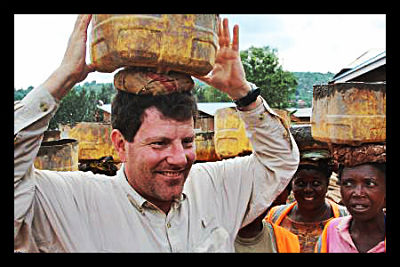 Twitter often has a reputation as being a stream of inconsequential fluff, with trending topics focusing on celebrity gossip or personal confessions. Yet, twitter can offer a continuous stream of valuable information on international affairs and development from the best in the world, summarized in less than 140 characters. The following are good sources for learning about the latest in international development issues.

Melinda Gates – @melindagates: Almost as famous as her husband, Melinda Gates acts as co-chair of the Bill and Melinda Gates Foundation. Her twitter account covers a range of issues, from tweeting live updates from her travels to posting bulletins about global health, to women’s rights and development news.

Nicholas Kristof – @NickKristof: A Pulitzer prize winning writer for the New York Times, Kristof is one of the most influential voices in international development. Known for his conscience and his tireless, hard-hitting journalism, Kristof’s tweets are a mix of links to his work, opportunities for getting involved, and opinions on current events.

Anne-Marie Slaughter – @SlaughterAm: Princeton Professor, director of Policy Planning, and formerly employed by the U.S. State Department, Anne-Marie Slaughter has impressive credentials. Her twitter feed is a slew of information on occurrences around the world, and not only the ones found in the headlines.

Susan Rice – @AmbassadorRice: U.S. Representative at the U.N. (though she finishes her post on Sunday June 30), Ambassador Rice’s twitter feed is a heartening look into all the work the U.S. does on behalf of oppressed groups around the world, and a reminder of all that is left to do.

Michael Clemens – @m_clem: One of the intellectual users of twitter, Clemens is a Harvard educated senior fellow at the Center for Global Development. He tweets links to in-depth discussions on development and economics.

Tom Murphy – @aviewfromthecave: A Boston based journalist and blogger, Tom Murphy was named one of Foreign Policy’s twitter accounts to follow, with good reason. Murphy has an amiable tone and feels like a friend referring you to worthwhile reading, if the reading is some of the industry’s best articles on aid and development (with the occasional mention of less heavy subjects, like Angry Birds).

How Africa Can End Hunger by 2025 Obama Pledges $6.5 Billion for Electricity in Africa
Scroll to top