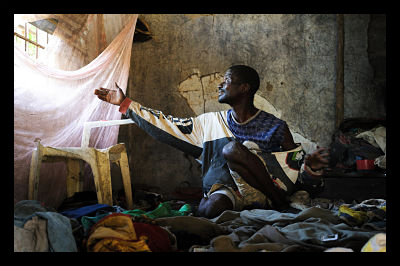 Mental health is a largely neglected concern in many African countries. Efforts are often allocated in favor of more publicized issues such as HIV/AIDS, water sanitation and maternal health. Thus, those living with mental disorders are oppressed by media, social stigma, and government disinterest. Many fail to recognize that general and mental health are inseparable. To fight poverty successfully, both issues must be dealt with equal significance.

Sierra Leone only offers one psychiatric hospital to its citizens and its distance and limited space is discouraging. Sierra Leone’s mental health system is lacking and after its decade-long civil war, restorations and improvements to the country’s policy and infrastructure are imperative. Recently, new mental health initiatives are surfacing in Sierra Leone’s communities thanks to the vision and leadership organizations and individuals provided.

University of Makeni’s Department of Mental Health is part of the Catholic Church-run private university in Sierra Leone. It is a far-reaching department that coordinates counseling activities for those in need and mental health training for nurses.

Makeni Mental Health Department endeavors to stimulate development in political, economic, social and religious aspects in Africa. The department was conceived by the Fatima Institute which also started the Mental Health, Behavioral Change and Social Inclusion Programme. The program hosts various events and activities including counseling, sensitization and training in their movement to eliminate social stigma people living with mental health illness face. Promoting positive behavioral change is also an integral part of the program’s philosophy.

Children’s mental health is part of the keystone to a nation’s future. The Child Protection Knowledge and Information Network (CPKIN) strives to evaluate and better understand how to improve support systems for vulnerable children. In a post-war environment, many children are displaced from family or have lost their family altogether. These children have seen and experienced physical and sexual abuse, often leaving a wound in their mental health. Their weakened psyches make them subject to further exploitation.

CPKIN is a project developed by a coalition between UNICEF, Child Fund Sierra Leone and the Ministry of Social Welfare’s Gender and Children’s Affairs. CPKIN connects internal children’s mental health support in communities and villages with the formal child protection sector. Text message technology will serve as the backbone of this communication system between village chiefs, child protection volunteers and the sector.

Questions will be sent to chiefs and volunteers via text messages in order to prompt these members of the support system to discuss and critically evaluate the efforts being done for the children’s well-being. CPKIN is a dynamic survey because members are able to evaluate and improve their efforts on a community level, while the responses they send through text messaging is used to improve the Child Protection Policy on the political level.

In lengthy detail, the policy document assesses the meager situation of those afflicted by mental health disorders, general and specific objectives, areas for action (treatment, rehabilitation, etc.), required services, as well as long- and short-term goals.

It is an optimistic initiative full of promise as it recognizes the social and economic barriers faced by those living with mental illness and acknowledges the stakeholders in need, such as mothers, children and those with HIV/AIDS.

It is a document that proves the government is well aware of the issues encasing mental health. However, there is an arduous trek separating promise and reality. It will take time before the policy is fully realized but the announcement of this policy is definitely something to celebrate.