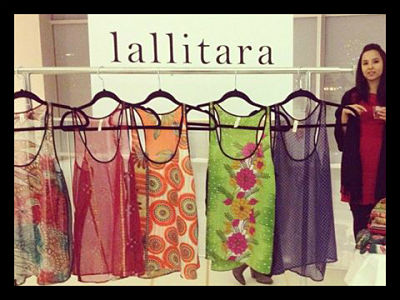 When most people consider helping the poor, their thoughts don’t immediately turn to beautifully custom-designed jewelry and clothing.

Bijal Shah has made it her mission, however, to help the poor “upscale upcycling” by creating stunning dresses from used saris and donating the proceeds to India’s poor, working people. Shah promotes her clothing and jewelry line called Lallitara at Sikara & Co, a store located on Newbury Street in Boston, M.A.

Upcycling refers to the practice of converting waste materials into new, better quality materials and products in order to reduce environmental waste and conserve resources.

Shah started out her career, however, as a corporate strategist, graduating with a chemical engineering degree from University of Pennsylvania and an MBA from M.I.T. So how did she end up selling $78 upcycled dresses for charity in a boutique store in Boston?

Shah explains that, at age 25, she had a sudden change of heart, and realized that she wanted to leave the corporate world behind and start making a difference in the world. So, she packed up, moved to India, and started working to help the poor slum population gain access to electricity.

After joining a sewing class to feel more connected with the women she was working with, Shah was introduced to the Indian second hand clothing market. After a sari she had sewed into a dress her Indian sewing class received numerous compliments from her American friends, Shah realized that she might have come up with a new idea to get Americans involved in alleviating global poverty.

Now, Lallitara is a thriving line that has expanded to include tank tops, shorts, and wristlets, with a clutch and long sleeve wrap dress in the works for the coming season.

Though Shah must keep looking forward with improving and revamping her line, her true passion lies in the social component of her fashion business. By buying the used saris directly from India at nearly three times their value and returning the line’s proceeds directly to the Indian workers, Shah is always looking for new, better ways she can help.

Shah’s innovation and drive to help the poor shows that channeling favorite American pastime – shopping – towards a good cause can be an easy, productive way to help those in need around the world.