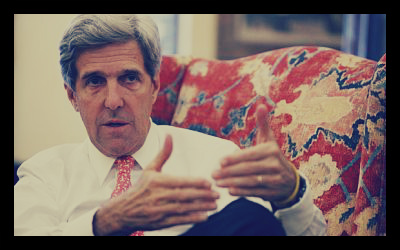 Earlier this week, the new Secretary of State John Kerry gave a brief talk to a group of college students at the State Department, where he stressed the importance of U.S. foreign aid in fighting poverty and terrorism. Kerry started by polling the auditorium and asked the students how much of the annual budget they thought is allocated towards the State Department, foreign affairs, and foreign aid.

Kerry went on to state that many Americans think that the amount of funds spent on foreign aid totals around 50 to 30 percent of the national annual budget, when in reality, foreign aid is allocated a mere 1 percent. He then went on to remark that he considers foreign aid spending “absolutely an investment,” and explained the real return on investment that is gained, although it is not always quantifiable.

“I can tell you that you could quantify it in troops that you don’t have to send somewhere, lives that are not lost because you managed to create a relationship with a country that resolves its problems peacefully and that doesn’t spill over into another nation, whether it’s a Mali or the problems we’re seeing in Egypt now or Syria. The ability to be able to help people to make peaceful transitions and to move their economies to open, accountable economies that engage with the rest of the world makes a world of difference to the lives of people in that country and everybody around them,” stated Kerry.

The Secretary of State also mentioned North Korea and the current state of human rights in the country, along with the current military actions towards additional missile tests and perhaps even nuclear activity, saying that the people of North Korea “desperately need to become more open and connected to the world.”

Kerry went on to mention the success of PEPFAR, the U.S. government’s initiative to curb the spread of AIDS, and how it has saved the lives of around 5 million children and increased health infrastructure throughout Africa. He also noted that the United States is in a unique and favorable position to have a military strong enough to “push back against evil and terrorism” and still have the ability to build up those same countries and give them democracy, freedom, and increased infrastructure.

Addressing the frequent question of why the U.S. has to be involved in so many global issues, he answered, “Because America, throughout the 20th century and now moving into this century, has proven again and again that there is an indispensable capacity to help bring about peace, find a way for people’s rights, their individual human rights to be able to be protected and to be able to live better lives.”

In support of his answer, he gave several examples of past instances where the U.S. has intervened and improved upon the situation – Kosovo, Bosnia, Serbia, and The Dayton Peace Accords, namely.

Kerry conceded that although U.S. foreign involvement has improved people’s lives and countries in several instances, it is “not perfect” and that mistakes have been made in the past, but also acknowledged that the foreign issues that we face today are much different than they were during WWII, when the U.S. had obvious and clear-cut enemies. Kerry mentioned the U.S. aid that was given to Germany and Japan to rebuild post-WWII and said that was the “best decision we ever made,” and went on to state that foreign policy is all about making difficult decisions like this in order to build for the future.

Kerry went on to state that now, more than ever, is the time when the U.S. needs to continue its nation-building and international development efforts, especially in the tumultuous Middle East, where a majority of the population are young adults facing unstable governments and poverty. He went on to mention the need to persuade Congress to continue to support nation-building efforts, despite heavy budget deficit talks here at home.

In wrapping up his speech, the Secretary of State asserted that the major challenge of U.S. foreign policy moving forward would be “to help these folks be able to find the kind of opportunity that you have and that a lot of other people strive for in different parts of the world. Our challenge is not to retreat and go inwards and say, ‘Oh, let them fight it out, it doesn’t make a difference.’ It does make all the difference in the world, as we saw in Afghanistan, where if you leave people to their own devices, a lot of extremists will just organize themselves and make life miserable for people somewhere.”

Secretary of State Kerry encourages foreign aid because of the massive, global impact it has. With increased advocacy and awareness, hopefully a more diverse group of legislators and policymakers will start to do the same.