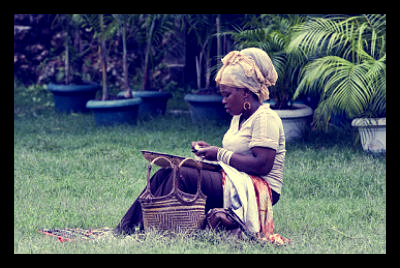 The U.S. African Development Foundation (USADF) has made it possible for women to have their own businesses, which has led to a chain reaction of employment and economic opportunity. USADF works with small holder farmers, youth, women and girls and recovering communities to empower them and assist them in programs to become part of Africa’s growth.

Joy Ndungutse and Janet Nkubana are sisters and went to USADF as experienced artisans needing to grow their business. After getting orders from Macy’s and other U.S. buyers, these women knew that they couldn’t fulfill these orders alone. With USADF, the sisters were able to build their business up and in the process of that, change the lives of five thousand women within their community.

Another example of women exercising their power is from Eastern Burkina Faso, where a woman named Madame Henriette saw an opportunity just by sitting in the shade one day. Shea trees produce fruit that are high in antioxidants and moisturizers, but collecting the shea would be very labor intensive and difficult for one woman. So in 1998, Henriette started the Association Ragussi, where she used the help of local women to help her collect the shea and turn it into something that would bring them profits.

USADF helped Henriette with Association Ragussi to where it is, growing on a large scale, and they brought in simple training while also improving the work environment for the women. Association Ragussi continued its growth when it got a contract with L’Occitane of France, which uses shea in their toiletries sold all over the world. Following this, Henriette started producing her own line of cosmetics that primarily sells in Ouagadougo, the capital of Burkina Faso. In the three years that Ragussi has been an association, it has doubled its revenues, thanks to the 1,259 members that helped it along the way.

Rwanda and Burkina Faso are showing impactful changes for women who empower the community with opportunities to grow. Thanks to these local opportunities and the USADF, the women and everyone involved in helping them are able to pay school fees, save money and build assets for the future.

Malnutrition in BeninOrganization Improves Education in Bangladesh
Scroll to top