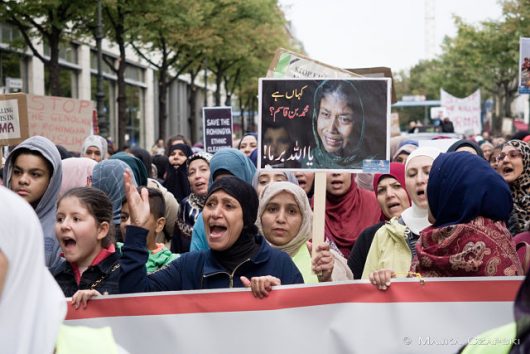 As a minority group, Rohingya Muslims have been subjected to violence throughout the entirety of their existence. In what is being called “ethnic cleansing” and “genocide”, more than 400 Rohingya Muslims were killed in Burma in the month of August 2017.

The extreme violence that they have been facing in Burma has caused almost 90,000 to flee to neighboring Bangladesh in search of safety. The violence was reportedly set off by a group of Rohingya insurgents who attacked police posts in the Burma state of Rakhine on August 25, 2017.

Rohingya militants are being blamed by Burmese officials for burning homes and killing civilians. However, rights monitors and Rohingya Muslims argue that the Burmese Army is using this claim to force them out of Burma.

Rohingya Muslims living in Burma do not receive full citizenship rights, and they often need to seek official permission to marry or travel outside of their villages.

Zarif denounced the “global silence on continuing violence against Rohingya Muslims” saying that “international action [is] crucial to prevent further ethnic cleansing—UN must rally” in a post he made on Twitter.

Additionally, Pakistani Foreign Minister Khawaja Muhammad Asif has been encouraging Burma to investigate the alleged atrocities against the Muslims of Rohingya.

According to a United Nations spokeswoman, the Rohingya Muslims are “probably the most friendless people in the world” as they have struggled to find safety or permanent civilization in any area of the world.

While the people are facing violence, rape and injustice carried out by the Burmese army, their attempts to flee Burma are often met with more violence and brutality by human traffickers and coast guards of other nations.

This month, former United Nations secretary general Kofi Annan filed a report that urged the Burmese government to restore citizenship rights, which were stripped in 1982, to the Rohingya.

Although conditions seem nearly hopeless for Rohingya Muslims living in Burma, world leaders are working together to support this minority group. Help for them is on the way, although it is in question whether it will arrive on time.