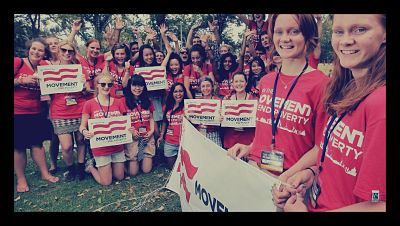 Over 300 youth members from the Victorian contingent of the Oaktree Foundation’s ‘Roadtrip to End Poverty’ joined to urge Australia to increase its foreign aid!

Currently, Australia spends 0.35 percent of its gross national income in its fight against poverty, and the movement is calling for 0.7 percent. On March 12th, red was the color that these youth ambassadors wore and painted all over Albury. 16 groups, each group composed of 5, has started on a series of road-trips to meet with various members of parliament urging them to raise foreign aid.

According to road-trip manager, Catherine Nadel, the movement’s political goal is to increase foreign aid, while the social goal is to create “a movement of young leaders.” For two of the involved members, twin sisters Jacinta and Sharon Robinson, “poverty is a matter close to their hearts.” Jacinta experienced living on 2 dollars a day for a week last year; thus both twins developed an appreciation for those who constantly and consistently live in poverty.

The road-trip ends in two days, on Sunday, in Sydney.