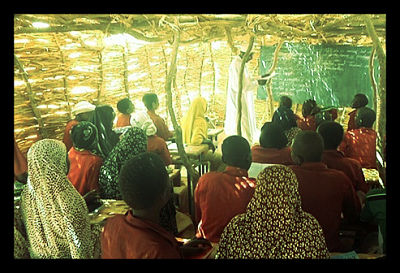 In the wake of the jihadist occupation of Mali, hundreds of thousands of displaced Malian children currently await the opportunity to return to school. The country’s $9.1 million back-to-school campaign, “Peace is back, School is back,” aims to re-establish the education system by reinstating teachers and providing school supplies. The campaign also plans to provide therapy for children and teachers affected by secessionist occupation of the country.

Among obstacles to the campaign are teachers who have yet to return to the north after seeking refuge in the south. Seen by jihadists as a face of the Malian state, many teachers fled for their lives when groups linked to al-Qaeda began to target schools that employed “western-style” education methods. Books were burned and classrooms were destroyed. Teachers were forced to flee south. Many of these teachers are still skeptical of security in the north and are hesitant to return.

“We have to help the teachers deal with psycho-social trauma for themselves and for the children,” Francoise Ackermans, Unicef’s representative to Mali, said to The Guardian.

Mali’s Ministry of Education reports that 1,400 of 2,500 displaced teachers have returned to the north and taken advantage of a grant from the European Union that allots $500 for each returning teacher. However, even if all 2,500 teachers are accounted for, 2,500 teaching positions in northern Mali will remain empty. To combat this problem, Unicef is providing training and therapy for 9,000 Malian teachers. Financial contributions to the campaign are also lacking. Ackermans noted that only $4 million have been pledged to the campaign so far. She emphasizes that if the campaign is to be successful, effective communication among communities is key.

“It’s a nationwide intervention and we have to mobilize the communities and send the right messages,” Ackermans said. “So it’s about communication and mobilization at the community level.”

Education is Mali’s focus in postwar recovery. Despite financial hardship and a lack of teachers, progress is being made. Children in southern Mali begin a new school year on October 1st. Children in northern Mali, who are currently participating in accelerated learning programs, will begin in November. Ackermans refers to education as “the cornerstone of Mali’s reconstruction.”

“What’s a more visible sign of things going back to normal than a girl and a boy walking to school in the morning?” Ackermans asked.

The campaign still has a long way to go in accommodating the estimated 800,000 children affected by the jihadist occupation. If the campaign is to be successful, the international community needs to step up by raising awareness and financial support. Without securing its future by providing its children with access to education, the country cannot remain stable. Ackerman stresses that each child has the right to education, and Mali will not be able to return to normality until that right is realized.

“An educated child is becoming a citizen of his own country and of the world. This is one of the basic rights of every child,” Ackermans said to Voice of America. “We have to commit ourselves to work together on that.”

What is Swadhaar? Using CDs to Clean Water
Scroll to top