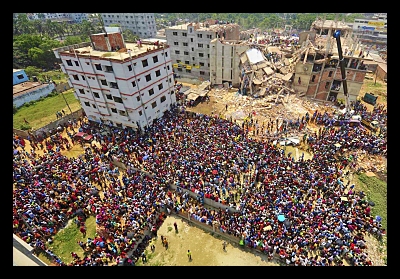 In the wake of the recent garment factory tragedy in Bangladesh, some high-profile retailers have signed an agreement to fund safety renovations on their factories there. Bangladeshi factories have a history of hazardous conditions. Workers are often willing or forced to work in obviously dangerous circumstances. The factory buildings can be unstable, usually resulting from illegal additions, and workers are often overcrowded and underpaid. The minimum wage in Bangladesh is roughly $38 dollars per month. However, most workers’ gratitude for the work is more powerful than their fear of the working conditions.

In November 2012, a fire in a Bangladeshi clothing factory killed 112 people. Although the multi-story factory employed 1,700 people, it was not equipped with any fire escapes. The factory had received a “high risk” safety rating in May 2011 and a “medium risk” rating in August 2011. The large conglomerate that owned the factory had a wide-reaching market. It sold to Walmart and IKEA, and exported to the U.S., Germany, France, Italy, and the Netherlands.

Although this fire was tragic, recent events in Bangladesh have understandably garnered much more attention and outrage. The garment factory building collapse on April 24th, 2013 claimed 1,127 lives. Authorities claim that the building owner added on to the factory illegally, so the structure was not as stable as it should have been. The owner also housed heavy equipment on upper levels, compounding the problem. Workers had seen a crack in the building and many had refused to come to work the day before the collapse. However, they had been forced to resume work as usual the next day. In what is considered a direct reaction to the tragedy, the Bangladeshi government recently decided to allow trade unions for garment works and appointed a committee to discuss raising the minimum wage. While these changes are a step in the right direction, their effectiveness is still in question. Companies can still fire workers for unionizing, and unsafe factory additions are clearly happening, even though there are safety regulations in place.

The recent tragedy in Bangladesh has resurrected ethical questions surrounding first-world clothing companies’ use of Bangladeshi workers as cheap labor. Labor rights activists have attempted to persuade some of these first-world companies to take action by covering the costs of improving safety conditions in the factories they do business with. Recently, two of these companies, H&M and Inditex, have done so by signing the Accord on Fire and Building Safety in Bangladesh. This agreement states that retailers must pay for all necessary safety renovations to factories, which will be subject to independent inspections made available to the public. These companies have agreed not to work with any factory that resists essential building changes. Under the contract, workers are also granted the right to refuse to enter a building they deem unsafe.

This agreement is seen as a major step forward for the movement, as H&M is the chief manufacturer of clothing in Bangladesh and Inditex is the leading fashion apparel company in the world. PVH, the owner of Tommy Hilfiger, already agreed to these terms last year, and other agreements are in the works with Gap, Wal-Mart, and Benetton.