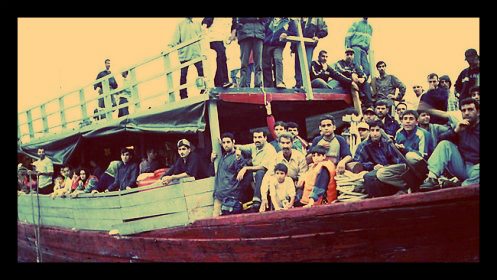 A recently married couple from Tehran just made their third attempt, along with 57 other asylum seekers, to reach Christmas Island, Australia.  If the weather is stable and the small boat holds up, their more than 200 mile trip across the Indian Ocean into Australian territory should last three days.  However, since June, this three day trip has ended tragically taking the lives of over 100 people.

The first “boat people” to seek asylum in Australia were the Vietnamese during the mid-1970s.  According to Luke Mogelson, a NY Times correspondent that actually endured one of these journeys posing as a refugee, Australia is extremely concerned with such people and, in response to such concerns, they adopted The Pacific Solution as a way to send asylum seekers to detention centers with the help of the Australian navy.

These detention centers are located in Papa New Guinea, or on the miniscule island state in Micronesia called The Republic of Nauru.  Both locations rely heavily on Australian aid.

Mogelson also mentions that, “over the past four years, most European countries have absorbed more asylum seekers, per capita, than Australia – some of them, like Sweden and Liechtenstein, seven times as many.”

As a result of such absorption, the Pacific Solution has been denounced repeatedly by refugee and human rights advocates.  The BBC reports that Australia plans to increase the capacity of their refugee center to more than 2,000 beds to cope with the demand.  Furthermore, Prime Minister Kevin Rudd, also according to the BBC, promised to take a hard line approach to people smugglers, but insists that anyone seeking asylum will be treated humanely.

For the most part, the issue surrounding human smuggling prompts Australia to be weary of refugees.  Luke Mogelson from the NY Times has lived in Afghanistan and explains that the refugee smuggling business is conducted through a money transfer system known in the Muslim world as hawala.  This system is convenient especially for Afghani people that do not have legitimate bank accounts, but have family living abroad that are in need of remittances.

Unlike most refugees, the recently married couple from Tehran previously mentioned continuously persisted in getting to Christmas Island so their child would be born there.  Other refugees typically expect to be reunited with their respective families after arriving in Australia, few want to risk the lives of their children on the treacherous trip.

Despite the fact that thousands of refugees have died attempting to reach Christmas Island, people continue making the trip, some even more than once.  The conditions they endure during their trip are unthinkable, their dreams of a new life quickly being countered with the nightmare of a ride they face on the way to safety.