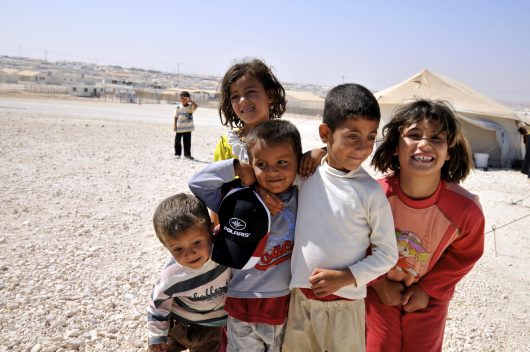 When the Syrian Civil War broke out, Jordan seemed a logical place to migrate. Because of its close proximity, many migrants had relatives to stay with across the border. Unfortunately, as Syria became less hospitable, the small country of Jordan became host for a massive refugee population, 664,000 people.

Newcomers struggled to integrate, and the high cost of work permits was an immense burden. In order to alleviate this, work permit fees were waived for three months, providing 20,000 refugees in Jordan with legal employment, and quotas were implemented for Syrian employment. While 80% of the 664,000 refugees in Jordan live in cities, 20% live in the city of Zaatari. According to the Wall Street Journal, Zaatari, Jordan’s fourth-largest city, is home to the fourth-largest refugee camp in the world. To a certain extent, life goes on for refugees. Those who can attend school do, and those who can work try to find jobs. However, Zaatari suffers from a lack of amenities like water and infrastructure, and many refugees work illegally, living in constant fear of discovery.

Before the grace period, work permit costs ranged from $170 to $1,270. From April to July, work permits were free for refugees. The United Nations High Commissioner for Refugees told the story of Khaled, a Syrian man who, as his family’s sole financial provider, is proud to finally be working legally in his new home at a farm. BBC wrote about a Jordanian farmer who is happy to finally have a consistent source of legal labor.

The reception of free work permits for refugees was not entirely positive. Work permits are sponsored by fixed employers, and many employers are hesitant to make the commitment. Refugees in Jordan working odd, short-term jobs are not eligible. Furthermore, many Jordanians are frustrated by the program due to lingering unemployment rates. Between the influx of refugees and the loss of trade from neighboring countries, Jordan’s economy is lagging. These factors resulted in the number of Syrian permit recipients falling short of the country’s expectations. However, the BBC remains optimistic. Just last month, an agreement was reached permitting Jordan to sell to the European Union duty-free in exchange for fulfilling Syrian employment quotas.

The previously mentioned farmer is proud of his 350 workers and happy that they can “live with dignity.” While less than half of the expected work permits were distributed, UNHCR is still calling the initiative a success. Twenty thousand Syrian workers are now protected under Jordanian law, and recent measures should continue to encourage employment.

Make Your Voice Heard: Why It Is Important to Vote in the U.S. FEIH: Giving Education to the Children of Honduras
Scroll to top