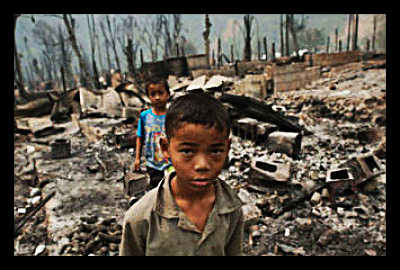 As of December 2013, Thailand has had 646,770 incoming refugees, mostly from Myanmar, to which the Thai government responded by setting up nine camps on their border for temporary shelter. The United Nations reports that “with possible reduction in humanitarian assistance, the protection risks of economically vulnerable refugees who might resort to negative coping mechanisms for survival will represent an additional challenge…”

Before 2013 came to a close, one last tragedy hit the Thai people on December 27. Fires in two of the refugee camps on the Burmese border left the International Rescue Committee (IRC) to respond to the disaster, which caused approximately 600 people to become homeless. So far only one death has been reported, but 600 people are still left without homes.

The director of IRC programs in Thailand explains “This is a sad reminder of the refugee’s vulnerable living conditions. Families lost all of their possessions in a matter of minutes.” What would you do if you saw your possessions being turned to ashes? The people of Thailand also did not know what to do.

The IRC has since stepped in to provide health care, water and other services to all nine of the refugee camps, not only the two affected by the fire. Unfortunately, the Thai people did not expect anything less than a tragic end to 2013, but are thankful for the various health teams visiting the displaced families for counseling.

UNHCR explains that the refugees in Thailand have been fleeing conflict and crossing Myanmar’s eastern border jungles for safety for 30 years. Moreover, the IRC began working in Thailand in 1976, in response to the influx of refugees from Vietnam, Laos and Cambodia.

As it stands, the IRC has, for a while, been responsible for aiding 140,000 refugees in Thailand, responding to emergencies by providing urgent health care and supplies. Additionally, IRC provides legal counseling, emotional support and even assistance for refugees seeking admission to the United States.