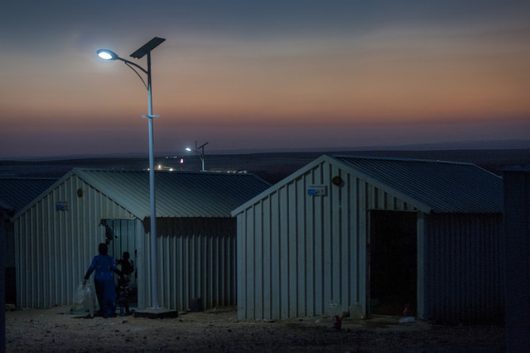 A new solar plant in the Jordanian camp Azraq, built in cooperation with the UNHCR, the IKEA Foundation and the Jordanian solar company Mustakbal, will boost living standards by extending refugees’ access to power and reduce spending as well as Carbon dioxide emissions.

After the camp’s foundation in 2014, its residents lacked access to electricity for two years and were without any means to preserve food or cool their shelters in the heat of the Northern Jordanian desert. But in early 2017, a foundation introduced electricity to these areas for the first time.

The new $9.6 million solar plant, financed by the IKEA foundation’s Brighter Lives for Refugees campaign, supplies 20,000 of the camp’s residents with clean energy. In 2018, the UNHCR plans to extend the access to energy from the solar plant to all 36,000 Syrian refugees living in Azraq.

Access to power allows for the use of refrigerators, fans, washing machines and cell phones, all of which largely improve the quality of everyday life in the camp. Additionally, Azraq can now be lit up at night – providing a safer environment, and allowing for life to go on after the sun has gone down.

The Jordanian solar company Mustakbal supervised the construction of the plant, with the help of over 50 employees from the refugee community. This provided the refugees with an opportunity to gain income and skills. Some will continue to work with the maintenance of the plant in the future.

When the solar plant generates surplus energy, the plant funnels back to the national grid of Jordan for free. This is not only a financial relief for the state but also an important contribution to plans to switch to entirely green energy by 2020.

The UNHCR estimates that by using the solar plant to ensure refugees’ access to power, it will save $1.5 million annually; money that can be invested elsewhere in the camp. For instance, the money can be used to improve sanitation and shelters, and to organize activities for the camp’s residents.