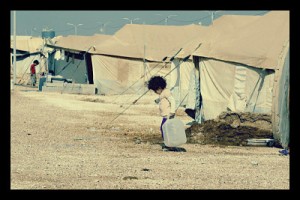 Half a million people or one third of all refugees from the conflict in Syria. These are the realities of the influx of Syrian refugees that has flooded into Jordan since the start of the conflict.

For two years, Jordan has accepted these refugees, setting up camps hosting up to 100,000 Syrians. The situation, however, has become extreme. With numbers like these resources and supplies have become a major concern. And as a result, Jordan has closed its border with Syria, turning all but critically injured refugees away.

Jordan has yet to give an official explanation for the closure, but their reasons are evident. With no assistance from the outside world, Jordan has been bearing the cost of these refugees for two years now. This includes both running the refugee camps and providing healthcare. And with such crowded living conditions  in the camps, rates of infectious diseases continue to climb. Furthermore, as summer approaches, the risk of dehydration increases. All of these conditions place huge demands on the Jordanian government.

While many international organizations are already working in the region, including Médecins Sans Frontières, what is really needed is financial support. These organizations have limited funding, and without the proper infrastructure in place, their impact is limited.

It’s time for the international community to step in, rather than simply allowing the countries like Jordan that neighbor Syria to bear the brunt of the responsibility for the welfare of the refugees.