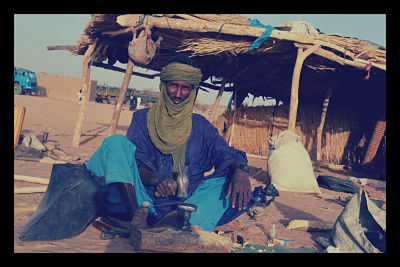 In 2012, Ali Mahmoud fled his home country of Mali after a coup d’etat plunged the nation into a state of hardship. However, after relocating to a refugee camp in western Niger, Mahmoud has since found fame, fortune, and even love.

The 40 year-old artisan became a staple of his refugee camp by forging and repairing tools with his blacksmithing expertise. Specializing in knives and ornamental swords, Mahmoud’s one-man business earns roughly $50 USD per day. This number may seem modest, but these profits are amidst a population whose average annual income is equivalent to $360 USD. With over 55% of its citizens in poverty, Niger is one of the poorest countries in the world.

Ali’s father, Galio, explains this success is in part because “Every man here owns a sword or wants to own one.”

Constructing a sword or knife can take up to four days for Mahmoud. He buys his metals from the local market and works at an anvil from outside his straw shelter. His knives are sold for roughly $50 USD, whereas a sword and sheath can be purchased for about twice that price. For those who are unable to afford his goods, Mahmoud is open to bartering; he most commonly receives gifts of food in exchange for his services.

Mahmoud has been conscious of accruing a savings to finance his future wedding. His wife-to-be, Anata, is an 18 year old girl who was raised in the same hometown as Mahmoud. He has saved over $600 USD to pay for Anata’s dowry, simply noting that he is “very happy to have met Anata.”

Mahmoud’s business was supported by the Office of the United States High Commissioner for Refugees (UNHCR), which has organized projects to help refugees develop an income and become self sustaining. UNHCR will be moving Mahmoud and 17,000 Malian refugees to a camp in Intikan, which is a safer location deeper in Niger. Despite this, Mahmoud is eager that the move will allow his customer base to grow, and he aspires to expand his business to allow other Malian refugees to work under him.

“I am eager to go as soon as possible to Intikan,” he explains, “where I hope the number of my customers will double or triple.”

Blacksmithing was once a cornerstone of civilization, with blacksmiths being as common as local general stores. However, the industrial revolution significantly decreased the demand for blacksmiths. While niche organizations have kept the trade alive to this day, it is usually practiced for the purpose of art as opposed to utility.

For a country like Niger, the demand for the blacksmith’s skillset has proven itself. As Maumoud was given the resources to help himself, he works to give others the tools they need to become self sustainable. His story proves that, even in a struggling country, the entrepreneurial spirit can be found in the least likely of places.