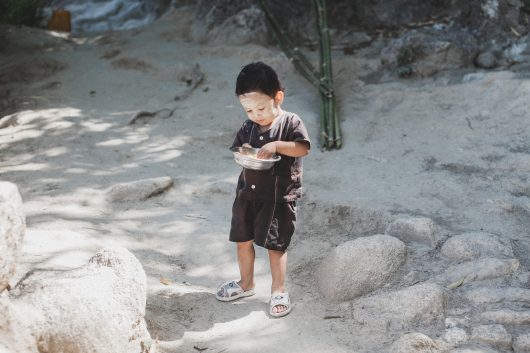 Burma, also referred to as Myanmar, is the second largest country located in Southeast Asia bordering the countries of Bangladesh and Thailand as well as the Andaman Sea and the Bay of Bengal. Burma is reducing hunger showing a valiant effort by the government and nonprofits.

From 1962 to 2011, Burma was considered a pariah state due decades of oppressive rule from a military junta.

When the new civilian government came into power in 2011, the country found itself with remnants of human rights abuses, such as hunger, from the former military junta. However, government reforms and nonprofit organizations are underway in order to combat hunger in Burma.

According to the 2014 Human Development Report, Burma ranks 150 out of 187 countries in terms of being severely underdeveloped.

As a result, malnutrition rates in the country continue to rank among the highest in the world. With undernutrition being linked to the 35 percent of stunted children and the 8 percent of acutely malnourished children.

In addition, erratic conflicts of communal violence increase, prevent and limit food security for those who suffer from hunger in Burma. Communal violence in Burma is often between Muslims and Buddhists fighting over sexual assault accusations and other local disagreements.

Nevertheless, Hunger in Burma is slowly being tackled in part due to efforts from Burma’s government and non-profit organizations.

The government of Burma has initiated a commitment to decreasing the amount of hunger within the country. In 2013, Burma joined the SUN Movement in order to establish a National Plan of Action in Food and Nutrition. Additionally, the National Nutrition Centre in the Department of Health is collaborating with the Myanmar Nutrition Technical Network in the hopes of reducing hunger as a solution to poverty alleviation.

The Action Against Hunger campaign has reported that in just 2015, the organization has helped roughly 111,787 people in Burma. This figure includes providing 50,271 people with nutritional support, 39,081 people with access to safe water and sanitation and 22,435 people with increased economic self-sufficiency.

In addition, the World Food Programme states that they are aiding in combating hunger in Burma through providing food assistance for the 128,000 displaced people in Rakhine State, the 5,000 in Shan and the 39,000 in Kachin.