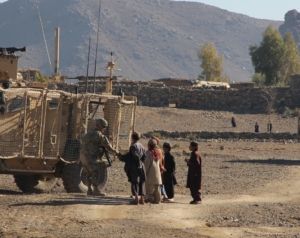 According to the Council on Foreign Relations’ website Americans, in general, want our country to supply more non-defense related international aid. A study of the 2011 federal budget and public opinion found that defense and military spending made up about 20 percent of that year’s budget while non-defense related aid was less than one percent. The study noted that the amount of humanitarian, non-military aid has been increasing over the last decade but has yet to reach even one percent.

One way or another, support has seemed to be slowly building over the last ten years and that’s a positive sign. While that trend in opinion is encouraging it does seem to work in competition with the large amount of funding running toward military spending. Even over the course of the last ten years in which we have executed one of the largest military pull-outs in history defense-related spending is still the Goliath to the David that is humanitarian aid, but perhaps this trend in public opinion and vocal supporters could help turn the tide.

The Council on Foreign Relations
CFR