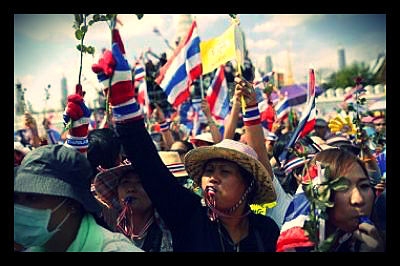 Prime Minister Yingluck Shinawatra is set to win the upcoming election on February 2.

Protesters used double-decker buses, pick up trucks and sandbags to block roads. The police have been taken over by protesters in the streets and government has called in 8,000 military personal to help tackle chaos and destruction.

Businesses, tourist groups and some of the countries top scholars are worried that Thailand is at risk of becoming increasingly violent and are pleading with protesters to cease their protests and allow the election to go ahead. Government supports in the North and Northeast have also lashed out at the protesters and asked for more support from the military.

The protest movement is being led by educated middle and upper class citizens who are highly motivated and idealistic, these individuals reside predominantly in Bangkok and southern Thailand. Protestors are acting out on hatred of Ms. Yingluck and her brother, Thaksin Shinawatra, a billionaire and former president who has left the country but hold significant influence over the country.

Human rights activists and others are requesting that protesters, police and the government respect human rights and avoid violence during these demonstrations in Bangkok.

The protests have been predominately peaceful with raising Thai flags, blowing whistles and spreading tents and picnic blankets across seven major intersections. However, authorities say 8 people have died and 470 people have been injured since the protests began in November.

Amnesty International has recognized that violence could erupt and asked officials to allow the citizens their right to peaceful process, but also warned protesters not to commit human rights abuses either.

U.N. Secretary General Ban Ki-moon spoke over the telephone to both Ms. Shinawatra and the opposition leader Abhisit Vejjajiv in attempts to bring a peaceful end to the protests and help them to reconcile their differences. Ms. Shinawatra has already made an attempt to calm the tensions; in December she arranged the February 2nd re-election. This move has not eased protestors who are asking Ms. Shinawatra to step down and allow an unelected “people’s council” to take over and put in place political reform.

A travel advisory has been put in effect for the region and the U.S. Embassy has warned America’s to avoid travel to Bangkok until the situation becomes more stable.