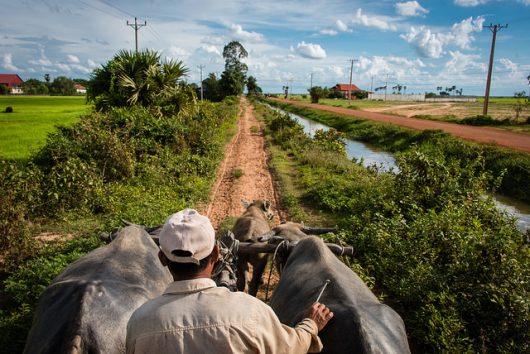 Crop and food security is a major concern throughout the world today, and is especially prevalent in developing countries. It is estimated that the global population will increase by 33 percent by 2050, reaching 10.5 billion. That’s a lot of mouths to feed, and the poorest countries will most likely experience the highest demand increase.

Current food supplies would need to increase by 60 percent in order to meet the demand in 2050. As much as 35 percent of crops are lost annually in developing countries due to undetected threats. Preventing crop loss prior to harvest is vital to ensuring future food security. Drone company Skycision prevents crop loss through aerial imagery and analysis.

Manual inspections of crop fields take time and money that poor farmers don’t have. The average scout in the US spends over 1,000 hours a year and costs an average of 50 USD an hour to employ. And even the best make mistakes and could miss a hidden blight or infestation.

Skycision can detect potential crop threats faster and more efficiently than a scout. The drone analyzes fields using infrared imagery that can identify stress weeks earlier than the naked eye, and thus can find problems before they can spread. The service also examines weather, soil and field data. Together, the information gathered by Skycision can help optimize the farmer’s annual crop yield.

Skycision focuses on preventing crop loss in order to secure global food security, but the service also conserves other resources. Crop loss doesn’t only threaten global food security. A loss of 30 percent of total production translates to 1.47 Gha of land, 0.75 trillion m3 of water and 1 percent of global energy wasted. Lowering crop loss will also save land, water and energy.

Brendan Carroll, founder of Skycision, believes the company has massive potential to impact developing countries and dramatically enhance their crop productivity. He also believes his drones will help poor farmers become more economically viable. Crop production usually counts for a significant proportion of income in impoverished regions, so an increase in product will result in more pay for farmers.