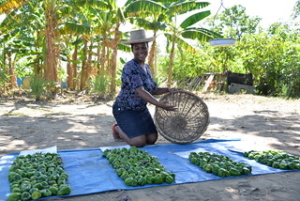 Last year, Haiti experienced “the perfect storm for a genuine food crisis.” From April to August, a severe drought had hit, preventing a good harvest and causing up to 60% losses in overall food production. Increasing global food prices made it difficult for those still recovering from the 2010 earthquake to buy basic food supplies.

And then Hurricane Isaac hit in August followed by Hurricane Sandy in October and extreme flooding in the north in November. In 2011, around 800,000 or 8% of the Haitian population were suffering from chronic malnutrition. Now, that number has nearly doubled at 1.52 million and we are on the verge of an emerging Haitian food crisis.

The people of Haiti have been thrown into a difficult situation, having to work with high living costs and surviving on one meal a day. Key to speeding up this recovery and preventing a Haitian food crisis is ensuring that farmers are able to sell their produce.

One solution would be to have a seed bank allowing for farmers to sell their seeds while making them available to others that would need them. Another idea would be to properly utilize water as a resource by constructing dams for irrigation and electricity. Investment in seed banks and water management are just a few ideas that could help prevent an oncoming Haitian food crisis. Medium and long-term solutions making use of resources already at hand are what is necessary for a sustainable Haiti.