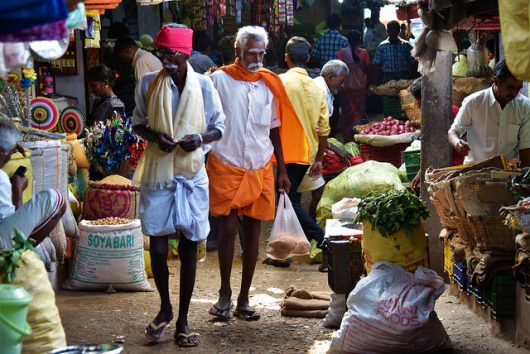 Vast Improvements in the Southern States

The MDP ranking is “an international measure of acute poverty,” which is based on three measures: health, education and living standards. In the last decade, India has seen its raking increase from 54 of 102 countries to 26, a rather significant jump, which equals approximately a 34 percent decline in poverty. It seems that this decline in poverty was due to the high performance of five southern states: Kerala, Tamil Nadu, Karnataka, Telangana and Andhra Pradesh.

These states have an average MDP of nine percent, while India has a national average of 21 percent. The states with the lowest MDP percentage are Kerala, with an MDP of one percent, and Tamil Nadu, with six percent. Interestingly, many states in India are significantly above the national average–for example, Rajasthan (31 percent) and Bihar (43 percent)–but the promising performance in the southern states lowers the national average, showing the positive effects of poverty reduction efforts in India.

How Poverty Reduction Efforts in India Are Helping

Until recently, many areas of India, including many in the southern states listed above, did not have school, health care, a post office or clean drinking water. Many of these problems have begun to be remedied.

Improvements in poverty reduction efforts in India can be seen in different ways across poorer areas of India. For example, in Surguja, most children go to school now and most families have a “job card.” Other regions, such as Uttar Pradesh, have not made nearly as much progress and many other areas are somewhere in between.

Improvements have also been seen in India’s GDP over the last decade, with a near doubling of national income reaching $7.98 trillion. Economic reform in the nation have led to improvements in poverty reduction efforts in India. The vast array of economic reform that has taken hold of India seems to be one of the reasons for this improvement, allowing India to begin to lift its citizens out of poverty.

An example is the Green Revolution. A push for food production within the nation itself first made India reach a self-sufficient food supply, then made the nation a surplus producer of food, allowing it to export food for greater income. Additionally, India became the world’s largest rice producer in 2015.

While there is definitely still work to do, India seems to be on a progressive path to poverty reduction. Through economic reform measures and improved quality of life, India is giving its citizens a pathway out of poverty.